I spent the best part of two days this weekend at an event for bloggers hosted by Britmums. I missed my boys terribly and am now out of my mind tired, but it was fabulous. The venue was really fancy, being in trendy East London as it was, and once lots of parenting bloggers arrived it was also packed, busy and very informative. It was my first time at Britmums live so I was a bit terrified and also quite excited to see what it was all about.

I went to sessions about feminism, social media and working with charities. It was all very interesting. I met bloggers whose words I've read that have made me laugh, cry and go 'huh ?' at various times. At the start of the event I was taking part in a discussion group where I met some bloggers I ended up practically stalking the rest of the time there. Apologies to Formerly Rock and Roll Mum  and the award-winning Vintage Folly  who probably got fed up of the sight of me grinning inanely at them as I was so delighted to have 'made friends' with real bloggers. Then the sheer delight at spotting Jen whose blog I follow and who is kind enough to read mine too. I feel like I already know her so to meet and talk to her in person was really lovely. I also managed to catch up with the only woman I know who has built an igloo with her kids. Strong coffee is also responsible for my purchase of a new handbag, but as the handle on the bag I was carrying had broken it was meant to be anyway.

Then there were the freebies; cupcakes, books, soft toys, nappies and more cupcakes (well maybe that was just me). I came away from it all with my head buzzing with ideas, sore shoulders from carrying all the swag and a very big question niggling me. Why were there barely any bloggers there who weren't white ? Now this isn't a criticism of the organisation, after all they don't pre-select who can join. Neither is it a judgement of those bloggers who were there. While we choose to blog we don't choose our ethnicity and we are who we are and we're all doing something we love (hopefully).

So maybe the pertinent question is do non-white bloggers just choose not to come to these events or are there just not that many of us ? After all there are writers from all different communities and people with an opinion or an interest to share. We are parents, we have families and issues and we talk about them, but maybe not on blogs. Katy Hill eloquently called us a room full of 'oversharers' and while I agree with that there is a lot I choose not to tell and I am very selective about what I share on here and on social media generally.

It was very obvious to me in all the sessions that I attended that I was the only non-white person in the audience and in every case an all-white panel sitting at the front. When milling around during breaks and at the evening drinks I did spot a couple of women who were also of an 'ethnic' persuasion (how on earth can I say it without sounding either poncey and right on or just daft ?), but otherwise it was a bit of a step back in time. I mean the serving staff and cloakroom attendants were a diverse bunch, but the conference attendees didn't appear to be. Mind you there were 500 of us and while that is a lot it's hardly every blogger in the UK is it ?

Anyway, I had a fab time at Britmums live and would recommend it for the fun, the socialising, the learning and most of all the cupcakes !! 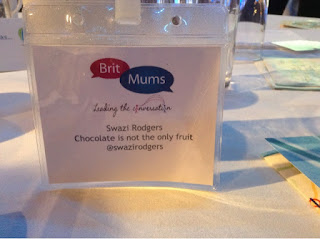