I used a Sat Nav today for the first time ever and it was fabulous !! Up until now I've muddled along with the AA route planner, then most recently Google maps and back in the stone age I used an atlas, but none of these have anything on the bossy woman in the Garmin. I do realise that I'm late to this party, but now I've tried it there is absolutely no going back for me.

Of course not having had a car for years has something to do with this cultural vacuum, but the other reason I told myself was that I didn't think I'd be able to drive and listen to music and the sat nav all at the same time. I used to pride myself on being able to listen to a few things at a time - which we all try to convince our parents we can do when they ask why we have the radio on when we're supposed to be doing homework or revising. Now, however, I struggle to hear a great deal and mostly say 'huh ?' as a reflex action even if I've actually heard what's been said and it takes my brain a few seconds to register it. I like to think that it's because I have so much going on in my head. I do have selective hearing where I can hear my son breathing heavily in a different room, but I can't hear my husband explaining the offside rule (for like the millionth time) right next to me.

I blame Sky plus. Where before we used to have to listen or accept that we just missed dialogue I can now still pause or rewind to hear the bon mots from Dave Lamb on Come Dine or the muffled dialogue on the Wire. Little effort is expended in watching / listening to television so I've simply lost the knack. I tend to watch with subtitles on now so that if the baby is asleep it won't disturb him. Of course if the cat is snoring I hear him above everything else. First thing in the morning when he's hungry it's hard not to hear him pleading from the bottom of the stairs to be fed after a night on the tiles (as evidenced by his freezing cold ears).

The order of priority in the house for feeding is: baby, cat, hubbie then me. I usually get to make a cuppa after they've all been fed and sometimes even get to sip some of it before moving on to do something else and coming back to a stone cold tea later. Prioritising the boys in the family isn't something I resent at all. It makes my life easier to have a system and it keeps them out of my kitchen. I only mention it so that when hubbie reads this he can teach the other boys of my Mother Theresa type sacrifices for them. The ultimate aim is to be venerated without being a martyr. Not in a tattoo that says ' I love Mum' - I'm sure that is a lovely tribute, but I'd prefer something less permanent and not so inky thanks. Besides which it would look ridiculous on Neo's beautiful white fur.

I'm thinking somewhere in between Priscilla Queen of the Desert and the Krays without the extreme violent criminal tendencies. A sane level of gratitude and not a little awe would do me just fine. With subtitles of course.
2 comments:

Email ThisBlogThis!Share to TwitterShare to FacebookShare to Pinterest
Labels: come dine with me

Underachievers of the world unite

It was during the lunch to celebrate my last day at work that I found out that it isn't just me who feels I haven't fulfilled the dreams I had in childhood. Well to be honest I haven't fulfilled the dreams I had more recently to finish unpacking the boxes when we moved house, but that is less profound.
When we're very young we believe we can do anything. Hubbie is convinced our son will be a lawyer (as well as being an accomplished musician, naturally) and in as much as we can help this we will. His dreams, however,  might be to be an astronaut, or - judging by how he watches Neo - to be a cat when he grows up. I still have a hankering to be a polar bear which is only really tempered when I watch Frozen Planet and see one struggling in arctic tundra without food. Also the weight thing would really mess with my head.
The ambitions I admit to are that I wanted to be a barrister when I was at school, but my parents made it very clear that we didn't have the sort of money or connections that would help me with that. The secret dream I had was to be a blonde as I honestly believed the hype about it being more fun.
My dreams now are far more prosaic:
* Health and happiness for everyone I love.
* That dress that makes me look slim under certain light in a particular mirror.
* A seat on the morning train.
* A parking space when I go to the shops.
* The fishcakes we like in Waitrose that are always sold out.
* Finishing a whole cup of tea while the baby sleeps.
* Getting all those flying bugs off the houseplant in our front room without resorting to insect genocide.
* The ignition actually switching the oven on so I don't have to lean into a gas filled oven with a match lit from the hob.
As a life plan goes it's not being the first Asian newsreader (damn you Lisa Aziz) or writing a fabulously received novel, or creating the next Peppa Pig (watch this space). It is a list I can actually see myself getting to the bottom of without feeling like an utter failure though and that has to be worth something.
No comments: 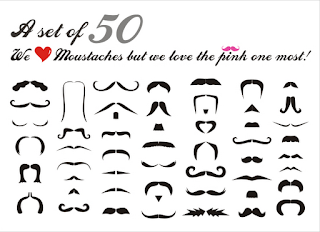 Something has happened to my male friends. They have replaced their normal photos on facebook (amusing cartoon depictions or ironic images) with what looks like those photos that are taken in shopping centres where you dress up as a person from the olden days. Not all of them are hirsute so this sudden need to grow facial fuzz is in some cases wildly disturbing. The ones who are naturally young looking now look like extras from Starsky and Hutch and others who are naturally hirsute now look like the station master from the Railway children.

The reason is - of course - Movember (see link at end of blog) which seems to have captured the interest where other causes have feared to tread. The traditional charity donor is a woman, older and gives to a range of causes. This donor would give a small amount regularly while alive then leave her entire life savings in her will to an animal charity causing a lengthy probate dispute with her family who had no idea that the donkeys would get the proceeds from the sale of her bungalow. As these lovely donors die off charities have desperately tried to diversity their donor base and have had to come up with new ways to appeal for funds.
In order to get men to donate to charity the challenge fundraising event was born and we have seen the walk along the Great Wall, the trek to the base camp of Everest or the cycle ride in Vietnam. This time, however, someone has hit on an idea so simple it is genius. Ask men not to do something and to get sponsored for it. I've lost count of the number of times a man has complained about having to shave, so the idea of not doing it must be like Christmas, New Year and England being in the World Cup Final all at once.

I doubt any charity, however forward thinking is going to encourage women to grow hair for sponsorship. If they did we could look forward to the prospect of breast cancer charities publicising "pits for tits." Do you find waxing taxing ? Never fear, grow your hair and instead of being a social pariah you will be adored for being the wonderful fundraiser you are. Nah, I just don't see it. The most a man can expect to suffer is some mild ridicule for growing a moustache, a woman ditching the bleach and wax or going all Frida Kahlo is just going to look like she's neglecting her personal appearance.