Tell me what happened and you get Brady face !!

There's an episode of american sitcom How I Met Your Mother where they are trying to avoid seeing the result of the superbowl so they can watch it on a recording. It's a modern take on a Likely Lads episode where they don't want to hear the score of the match they are going to watch on repeat later. The humour is in how they have to blindfold themselves and cover their ears while in company and even turn away from seeing any tv screens to ensure they don't spoil the surprise.

On a Wednesday when occasionally me and Hubbie have been out for the evening I can relate to both of these scenarios as we try and avoid all human contact and social media so that when we get home to watch the Apprentice we won't already know who was fired. It is a minefield of course as an inadvertent click of TV channel or sideways glance at the BBC news website could mean it's game over.

We take the suspense of it all very seriously so the fact that we live in a digital age where there are so many potential spoilers causes a frisson that possibly exceeds watching the show itself.

Now I can't sit here nattering I have a recording of the Apprentice to watch. Ooh look they're filming at a venue we looked at for out wedding reception !!

Whatever you do don't tell me what happens or guess what ? 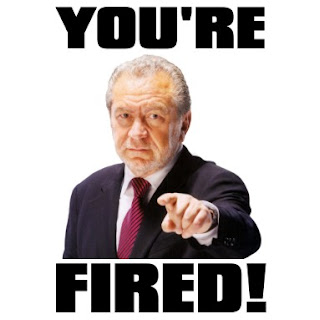