You better watch out … real bad...

I think I've scored a small victory today and I have Russell Brand to thank for it. 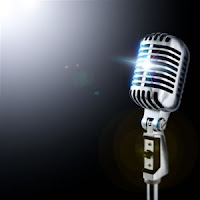 You see a few years ago after a particularly unpleasant evening at Jongleurs Hubbie decided that he didn't like stand-up comedy and wasn't going to go to gigs any more. All thanks to an idiotic Aussie comedian who thinks he's being 'controversial' when he's actually just being an arse. I've spent the ensuing years trying to rehabilitate the reputation of live comedy with small steps.

Firstly I can thank Daniel Kitson - we went to see him in Brighton then another time in London and Hubbie admitted that he liked him. The process of bringing him back to comedy had begun.

Then we had a set back in the unlikely form of Eddie Izzard. I'd made a really big deal about going to see him live as I've seen almost every tour he's done and met my closest friend at an Izzard gig many moons ago. Unfortunately the day before we went to see Eddie at Wembley the DVD of that very show had been released. I was so livid I stood outside looking for touts to buy the tickets so we could then go out for a meal instead.

Time passed and I went to watch comedy with other friends who like Phil Nicol and Doc Brown. Then Adam Hills' show The Last Leg became a fixture in our house during the Paralympics and we cried laughing watching his stand up show on TV. I tentatively asked Hubbie if he'd like to see Adam live in September and he said yes. Hoorah !!

Then a few weeks ago Hubbie bought us tickets to see Mark Thomas live. I'll say that again, HE bought the tickets voluntarily. It was a local gig trying out new material and we had a great evening together. Quite a safe option though as we have seen Mark Thomas before and we know we like his stuff.

Which brings us to today. I saw a tweet from Russell Brand that referred to his live gigs on the Messiah Complex tour. There were tickets available so I asked my pal first and she's not a fan of Brand so I asked Hubbie if he wanted to go, fully expecting a no. A few minutes later he replied with a reference from Ponderland (a clip show Russell used to do). Then just to be sure I asked again and he said "yes that sounds nice."

So the rehabilitation is complete. We can, once again, go to stand-up comedy gigs together.

I do believe that the Messiah has healed :o)