Manners maketh the man (and the toddler) 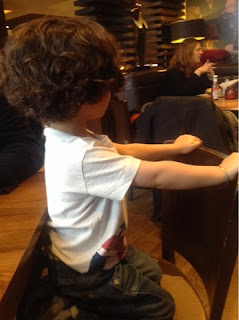 Wow it's already almost a week into the new year and I haven't had to write the date yet so I've not made the classic error of writing last year's by mistake. Having said that I never entirely got the hang of writing 2013 - I think it's to do with being an odd number or something - so I'm hoping 2014 will prove simpler to remember.

The one date I do know, however is Friday 10th January as that's the day my boy goes out with his beloved auntie to watch Dinosaur Zoo. I'm not sure he has much idea what's going to happen, but he does adore his auntie (Masi) so he's excited about seeing her. She looked after him a lot when he was a baby and when I returned to work for a few months when he was a year old she was his nanny so they are very close.

I'm looking forward to having the morning to myself, but I'm also hoping she can manage this tearaway toddler on her own. Me and Hubbie have taken him into central London and managed, but that's two of us and he is one fast moving three year old !

My main concern though is that taking a young child out can inspire really unpleasant reactions in other people. I don't want them to fall foul of someone like the rude and bolshie man who was sitting at the table next to us last week. We went out for lunch on New Year's Eve - we don't do night's out often any more - and went to a local pub that does nice food and where our son has always been made very welcome. The man at the next table was a classic wide boy type who was at turns rude, demanding and finally offensive to the waitress, his fellow diners and eventually in our general direction as my son was losing the plot waiting for his food. 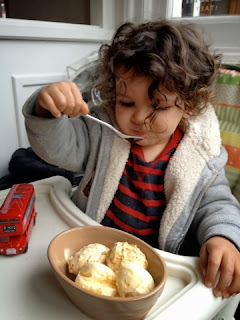 I'm not known for my even temper so Hubbie was bristling as he could see me stiffening and getting ready to have a row. Instead I picked up our son, walked to the pub garden and talked to him and calmed him (and myself) down. When we returned to the table the rude man was - thankfully - paying his bill and our food had arrived. We all sat and ate together and had a lovely meal.

We've been taking our son out for meals with us since he was a baby. His first experience was at the Champagne bar at St Pancras where we went for my birthday. He was only a few months old and the staff were helpful, kind and very accommodating. It helps that he loves to smile and now he can talk he's very entertaining and polite too so he wins over waiting staff and often fellow diners too.

My perspective on this is that if we take him out and about to nice places now he will have the required social skills as an adult. It's just a shame that the man at the other table clearly didn't have the same manners.