Honk if you wanna go faster !

This year has already been one of fundraising firsts. I spent February sugar free to raise money for Cancer Research UK - surprisingly no one was harmed in my sugar-free state. Well actually my macbook was on the receiving end of an errant cup of tea, but so far is appears to have survived any long term harm. I figured that as it's the shortest month it would be the best one to do something as radical as give up sugar and I managed it. Ok, there were a couple of notable exceptions - I did have a dessert on Valentine's Day and on the last day of February I had a pancake with sugar and lemon on it. Otherwise I did pretty well and I think it's given me an appreciation of how much sugar I was eating and how little I really need it.

As if I wasn't a sucker enough for punishment I'm taking part in Dechox this month. Yep, I'm staying off the chocolate for a whole month longer to raise funds for the British Heart Foundation. At least at the end of this it's Easter so I can indulge, but from past experience the anticipation of chocolate far exceeds the need for it once the deprivation ends.

You will probably have seen by now that I spent yesterday in the company of fellow Team Honkers and we walked ten miles around London wearing Red Nose themed outfits and preparing meals at each stop. This annual fundraiser is for Comic Relief and this year we called it The Honk Line - I've been calling it Honk The Line Johnny Cash style all this time.

First up we met up in Highgate and had breakfast in Waterlow Park - just as we were about to leave we bumped into Jamie Oliver with this wife Jools and their kids. He kindly agreed to a photo with a gaggle of overexcited people in red nose day gear. (If you don't believe me check out my twitter feed).

The idea of preparing food at each stop was taken up with gusto by the lovely team at Firepod and they carried this amazing bit of kit around with us for the whole day. When we stopped for lunch they made us fresh and delicious pizzas to eat.

Our final meal stop was afternoon tea at Lincoln's Inn Fields. We were all pretty tired by this point and needed the sit down. There were lots of people and dogs in the park enjoying the sunshine and a police helicopter overhead for a bit of local colour. Getting back up to do the final leg was not appealing in the slightest. Not least as my feet were really aching by this point and even today I'm feeling pain in my ankles. In total I walked ten miles and came home for a hot bath. I had hoped for breakfast in bed this morning, but for once the boys didn't wake up at 6am ready to rumble.

Ok, so it was tiring and all that, but the point of it all was to raise money so here's as link to my fundraising page: https://my.rednoseday.com/sponsor/Swazi As a team we've already raised almost £3,000 and with more events to come next weekend with Come Honk With Me we hope to exceed our past efforts. Your generosity really will help to make a world of difference to people living unimaginably tough lives. Thank you. 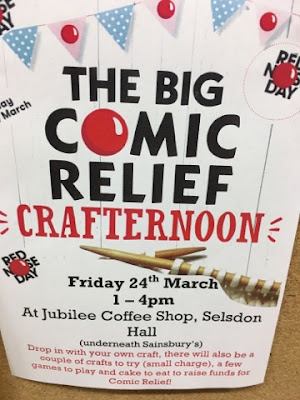 Red Nose Day is actually on Friday 24th March and it's going to be fantastic. I'm thinking of going to this - a crafternoon sounds wonderful doesn't it ?

Of course as this is me it doesn't end here - this walk was mere training for the 26.2 mile Moonwalk in May - I'll keep you posted...