As *Farah talks about her family threatening to kill her and the out of control drinking that has stopped her from achieving her ambitions her stunning smile remains. When talking about her drinking with friends she apologises for an accidental swear word and we laugh until she also mentions the self harm and violence that ensued. Farah's face is perfectly made up and we are mesmerised by her precise eyeliner and smooth skin. When she tells us she is hoping to start a successful beauty business we all admire what a superb advert she is for her own skills. It's only when she mentions the serious sexual assault for which her attackers were not punished that her eyes are downcast and she admits that whenever she's talked about it before she's cried. Today I feel the skin on my face tighten and my eyes prickle as I hold back the tears that are desperately close to cascading at how honest and brave she has been in telling us about her life.

Farah has just come out of a women's group session at New Horizons Youth Centre in North London. She has attended the centre for over a year having first come with a friend who needed to use their services. Now she is a regular here and the women's support worker Hazz - who is funded by Comic Relief - tells us that at times Farah has sought reassurance that people believe her because surely the case would not have been dropped if they didn't think she was lying. It is so unfair and difficult to explain why a lack of evidence can lead to her attackers walking free when she still carries it around with her. Without New Horizons Farah would still be in a spiral of self harm and drinking that has led to unsafe behaviour and robbed her of every opportunity that has come her way so far. The aftermath of the assault and the lack of justice could have sent her back to drink, but with the one to one and group support offered at the centre she is able to open up and share her experiences instead. 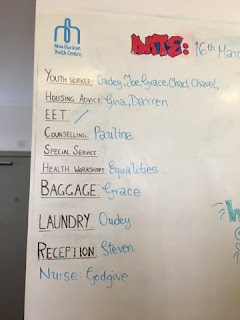 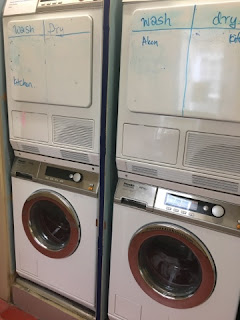 The New Horizons Youth Centre offers a non-judgemental place for young people where they can eat a meal, do laundry, talk to support workers if they want to and hang out with peers. On the afternoon we visited one young man was doing a magic trick in the lounge area involving a playing card and an orange. The reaction he got was fantastic and would honestly give Dynamo a run for his money !


We observed the women's group session in progress and noted the empty Haribo and Monster Munch packets on the table as the women took nail varnish bottles out of colourful make up bags. While they painted nails Hazz asked them questions ranging from light hearted to deep and emotional. At one point a woman was talking about wanting to wear a sari then another described how drinking made her feel 'invincible.' It's this approach that makes the women feel safe and it's takes skill and sensitivity to work as effectively as it does. It made me smile when they talked about a future session being Bollywood themed and one of the young women softly enquired, "we can still have Monster Munch right ?" It is so disarming to be reminded that however mature they appear these women are still so childlike.

Later we talk to the young women who facilitated this afternoon's session, *Polly and *Lucy. They are users of the centre and when asked where they'd be if they weren't here Lucy answers that she'd be on the streets or doing drugs. At one point she was coming to New Horizons every day and it was her stabliity in a life where she had none. Now she has a timetable and attends on specific days to give her a chance to develop other interests and she is feeling confident about seeking work. Both talk to us about how the centre staff are more like family to them than their actual families. This is an aspect of the work here that cannot be measured, but clearly is a major contributor to improving the lives of the young people who come here.


Any young person can access support from New Horizons, especially those who fall through the cracks. The young people who the local authority cannot help or who have moved from elsewhere in the country and therefore are not entitled to housing. They will be supported until the age of 22, but are not entirely cut off at this point. A worker will help them work towards independence from New Horizons so that they are not just left with no support once they turn 22.

In the years I've been fundraising with Team Honk I've been proud knowing that we're raising money for great causes both overseas and in the UK. It's wonderful to see first hand how the UK grants are being used to make such a profound difference to the lives of young people who would otherwise be left in difficult or harmful situations. One thing that really struck a chord with me was that all the young people we met have family relationships that have broken down. They do not have the safety net of support that my children do if anything goes wrong. As we left the centre I looked at the young men and women standing outside smoking just before it closed for the day. To a casual observer they seem just like anyone else. The best thing we can achieve by supporting projects like New Horizon is to instil in these young people the belief that they deserve the same chances as anyone else. I am grateful that New Horizons exists for vulnerable young people and has done for 50 years.

We are raising money again this year to support Red Nose Day and Comic Relief.
If you could donate any money it would be absolutely wonderful.
Thank you: https://my.rednoseday.com/sponsor/Swazi

Thank you to Ali at Comic Relief and Stella at New Horizons for making this visit possible. Special thanks to all the staff and young people we met and talked to on our visit. You are all amazing.

*The names of all the young women have been changed to respect their privacy.