If you're a regular reader you will know a little about the journey we had to take in order to meet our beloved boy. You may also have realised we've been trying for another for a while. I won't dwell on the details as friends & family reading this really won't want to know, but it's safe to share that seeing a lot of others who've gone on to have a second ( or more) has not been easy. I smile and congratulate them as it's churlish not to and they're probably not that keen to hear how we were so close and it didn't work out. No one wants to be a downer do they ? 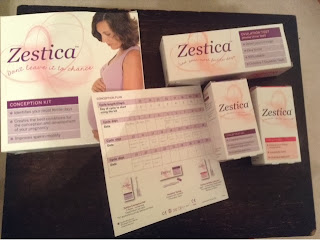 Another kindly blogger who's had similar experiences and is now pregnant with her second (and I'm genuinely very happy for her) put me in contact with Zestica as they have launched a kit to assist couples who are struggling to conceive. The kit comes with two different gels in individual tubes and a set of ovulation tests. There is a calendar provided to help you work out when to use which product.
The conception gels are used daily in the days leading up to ovulation and are designed to prepare you (the woman) to conceive. The ovulation kits help pin point when you ovulate so you can try on the most likely days. The fertility gels are to use on those days. Not to be too indelicate, but they're also for the woman and are supposed to help assist 'his' swimmers to Olympic standards.

The timings are a little difficult to get the hang of at first, but the instructions do help. There is a reference to an online calendar which I was unable to find so I relied on charting the days on paper. There is, however, an issue with the lack of spontaneity in having to pop in a gel before you can have some 'grown up time.'

I did not fall pregnant after using this kit, but I know that despite the stories you hear about things working first time they rarely do if you're already struggling to conceive. I was prepared to try shamanic healing, acupuncture and all manner of bizarre weirdness before we had our boy, so this is quite scientific in comparison.

It's not entirely clear what the science behind it is, but I'm guessing that most people using it won't ask too many questions if it works for them. It's priced at £39.99 which isn't the priciest kit I've seen so it's reasonable value. You get enough gels & tests for one cycle so if you're having to try again a few times the costs could be quite substantial.

If you're trying for a baby it is probably worth giving this kit a go. You will get a good idea how your cycle works (if you don't know already) and it's not that much of a hassle to use - aside from the spontaneity issue mentioned earlier of course.

You can purchase the kit from www.zestica.com and good luck !

Disclosure: I was sent this kit in order to write an honest review. No payment was received for this post.