Half term adventures by road and river

Half term is always a bundle of laughs in London with road closures and diversions as standard - I know it's easier to do this work when the kids are off school, but it's still very annoying ! I'm not sure what possessed us when we decided to go into central London for a day out with the boys. It turned out to be the day before the state opening of parliament and also the day of a protest by London taxi drivers. To say it was eventful would not be an overstatement.

As we arrived at Victoria and went to collect our tickets for the Big Bus Tour the boys were very excited about riding an open top bus. Big boy has been on one before, but baby boy hasn't so he loved hanging over the side - which gave my arm muscles a workout holding onto his legs to keep him from falling - I didn't want a Michael Jackson style incident ! There are different tours and you can take a circular tour and you can also hop on and hop off at points of interest. It was a lovely sunny day, but we had already decided we were going to take a boat trip so we got out at the South Bank / London Eye stop. Originally we were going to take the boys to the London Eye and The Aquarium, but I'm glad we didn't as both were heaving with half term kids and tourists. 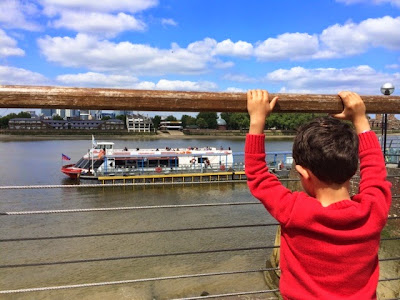 Instead we boarded a big boat under the London Eye - a city cruise is included in the ticket for Big Bus Tours and as we had a three day ticket we were able to travel all the way to Greenwich. City Cruises aren't guided trips, but you can buy a recorded guide in a range of languages if you want to. We were accompanied by Dean who gave us an amusing commentary on the sights en route. 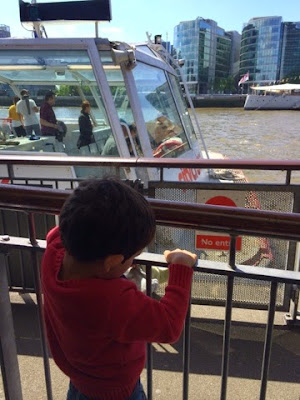 Greenwich has very special memories for me as I lived there in my early childhood and when I was younger all the museums and sights were free so we used to visit the Observatory and the Naval College during school holidays. I remember rolling down the hills in Greenwich Park with my friend Nichola and riding on the boats in the small boating lake. I hope the boys have lovely recollections of childhood when they grow up. There's a photo of me and my brother standing at the base of the rudder of the Cutty Sark. After a horrific fire a few years ago the tea clipper has been restored to pristine condition and you can visit again. There's even a cafe inside these days. 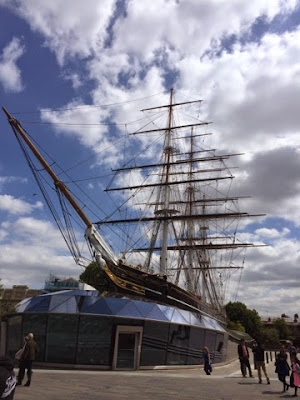 As we made our way home we decided to walk from Westminster Pier as the taxi protest was well underway and the vehicles on the roads were immoveable. We had clearly made the right choice with our river travel. As we made our way to Victoria Station to take the train home we spotted this bus sculpture. You may recall an earlier adventure featuring these bus sculptures so it was lovely to see another one. 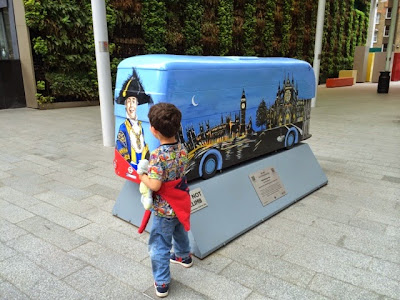 We're hoping to take a grown up night tour to make the most of the three day ticket. I highly recommend Big Bus Tours as a great way to see London by road and river. The guides are knowledgable and helpful and it's a great way to learn about the city even if you have lived here for years - like me - or if you are visiting from elsewhere. If you would like to book tickets you can find out more and book online here

Disclosure: The lovely folks at the Big Bus Tour London gave us a three day ticket for two adults (the children were free)

This post is being shared with the fab Country Kids link hosted by the lovely Fiona of Coombe Mill.