So it's been a pretty eventful few days.

On Monday night I went to the first night of Anything Goes at the Churchill Theatre in Bromley and it was absolutely fantastic ! I know all the songs (you probably do too) and it was just so vibrant and fun. It was a really great start to the week and seeing all the lovely dancers in their vintage outfits gave me some inspiration for my danceathon outfit next week.

It's been London Fashion Week - an event I used to take great interest in before it became entirely out of the realms of my reality - well since the Clothes Show stopped being shown on telly really. I always loved watching the catwalk shows (of course now it's called a runway instead which is part of the reason I stopped caring) and seeing what the designers had in store for the rich and thin. I am neither so you can see why it's less of a thing for me now.

To demonstrate how far I am from being a fashionista I got all discombobulated about a tweet I saw telling me that Krispy Kreme were giving away free doughnuts to celebrate their 1,000th store opening. I discreetly did up my cardigan (I said about the fashion thing didn't I ? I wasn't kidding !) and left the office. I did that fast walk that looks like you need the loo really urgently all the way to the shop on High Holborn and the nice man handed me a lovely and nutritionally questionable foodstuff in a bag. It made my day that did :) 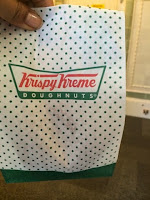 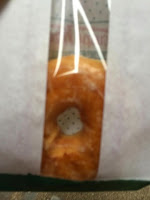 Then Madonna fell off a high stage in a wardrobe fail that looked terribly painful and caused all sorts of reactions - from claims that she had done it on purpose to those leaping to her defence by claiming that she has super human powers. I don't envy the person who had done up her cape at the neck. While I've always been an admirer of Madge it's no secret that she is not a fan of failure. It reminded me of her on stage during the blonde ambition tour and thinking how hard she worked to get fit so she could dance and sing for hours. That is a woman who works hard and it shows. I'm pretty sure if it was me I'd have stayed down and actually cried.

I almost did cry on Friday actually. During the end of the week assembly at school my boy finally received a special celebration certificate and badge at school for writing. It is so heartening for me to hear that he has been writing pages and pages of words. His teacher even quipped in the assembly that he must be 'writing a novel." I hope so. That would make me even prouder - as if that's even possible. 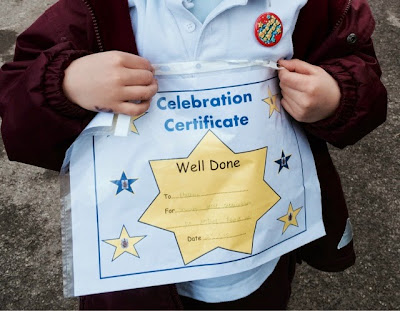 On top of all of that my biggest surprise came today when I checked my Red Nose Day fundraising page to discover that I've smashed the fundraising target I set for the Danceathon I'm taking part in with hundreds of others - and a fair few Team Honkers - at Wembley Arena to raise funds for Comic Relief. It has been an amazing and kind of so many lovely folks to sponsor me to take part in this. I genuinely appreciate every donation and I know it's not easy for everyone to give so thank you from my heart for doing so. 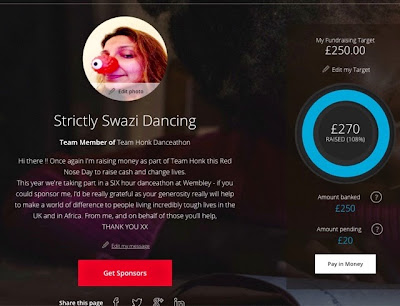 It's not too late to give if you still want to. I will share plenty of pics from the event itself and I haven't forgotten that I promised to do and film a happy dance when I reached my target. Keep an eye on t'internet as I expect it's going to make the whole gold dress/blue dress thing pale into the distance when it goes live :)

Disclosure: The lovely folks at the Churchill Theatre invited us to see Anything Goes free of charge.