Why my friend Penny wishes she had breast cancer. 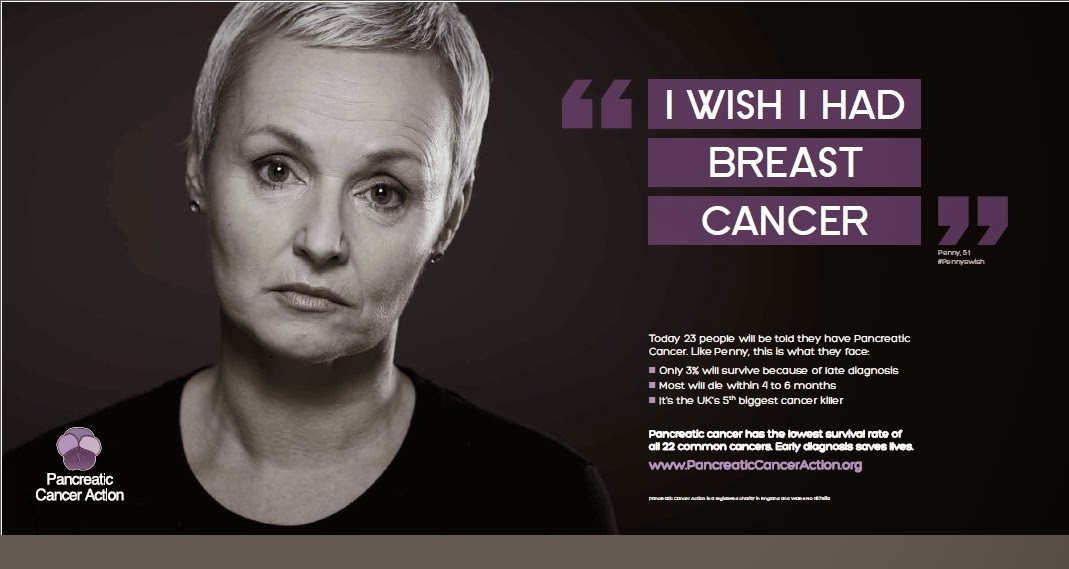 You may have seen this poster - it has been in papers and magazines and is also now on the walls of tube stations too. Hubbie came home from work last week and said, "did you know Penny is in the Evening Standard ?" This was the poster he was referring to.

The woman in the poster was one of our midwives. On the morning of 30th September 2010 she took over from the Glenis and Rosie who had been sweltering in the birth room with me since the previous afternoon. We had met Penny a few times and during the pre-natal checks we had talked about yoga, being healthy and how she loved her job - helping women to give birth as naturally as possible. By the time we got to the day our son was born we felt we knew her pretty well. As things didn't go to plan in the birth (when do they ever ?) she was calm and - more importantly - a calming influence. It's this calmness and the smile she had on her face as she told Hubbie our son was born and she'd stay with me as he went to meet our boy that I remember vividly. Penny took the most beautiful photos of us all as a family within minutes and the image of my Hubbie joyful at the sight of our much longed for newborn, healthy son is one that I am forever grateful to her for capturing for us.

We stayed in touch and shared photos on Facebook and were delighted when she announced she was getting married to her wonderful partner Terry. Beautiful photos of their special day followed. Then last year she dropped a bombshell when she told us all that she had inoperable pancreatic cancer. It was very serious and the prognosis was not good. This was a woman who was healthy, fit and took care of herself. It turns out it had taken months of going back and forth to get that diagnosis even though Penny's father had pancreatic cancer. Her own children are similarly at risk.

I interviewed Penny on my radio show last year - you can listen to the interview here. Since she was diagnosed she has been determined to increase awareness of pancreatic cancer and how serious it is. She has been interviewed in magazines, on television and on radio. As she says she wants something good to come out of this and if people get tested and know what to look out for then maybe their chances of surviving will be better than the current shockingly low rate of 3%. Pancreatic cancer is the fifth biggest cancer killer in the UK and yet so few people know anything about it.

So we come to the controversy caused by the words, "I wish I had breast cancer." There has been all manner of hand-wringing and media sorts claiming it's immoral and terrible to wish to have any cancer. The people featured in the campaign have spoken on TV and radio about why they took part and they have even been asked if they regret the sentiment of the poster. Considering that Penny and the others featured in the campaign all have Pancreatic Cancer and know their chances of surviving would be much better if they had breast cancer I think they have a right to express how they feel in any way they choose. None of this takes away from the pain and anguish of breast cancer - this isn't a competition.

The lovely folks at Pancreatic Cancer Action have sent me this handy infographic to share with you. They are keen to see more people being diagnosed early enough to increase their chances of surviving.

I hope that Penny's amazing progress continues in a positive direction. She has been tireless in campaigning all the while undergoing gruelling treatment that has left her feeling sick and exhausted. The hope is that after this latest round of radiotherapy she will be able to have an operation to increase her life chances.

Kerry Harvey also appeared in the posters and TV advertising and she gave interviews passionately defending her decision to take part in such a controversial campaign. Sadly Kerry passed away on Saturday morning.  I would like to dedicate this post to her memory and to Penny for her amazing strength. They are both genuinely an inspiration.

Thanks to Pancreatic Cancer Action for giving permission to use these images.