They don't do Hallmark cards for two and a half do they ? 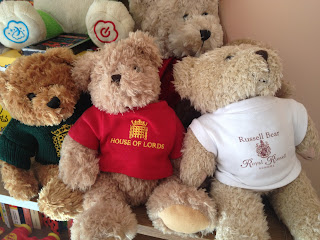 My boy turned 2 and a half this week. It wasn't greeted with much fanfare, but he did enjoy a Peppa Pig cake at my parents' house on Good Friday and insisted on having candles to blow out. It has become a tradition when we visit that they get him a cake as he loves birthdays so much. We end up having to google whose birthday it is so that we have someone to celebrate for, but it is quite funny and I will enjoy telling him about it when he's a stroppy teenager.

Talking of which this new age and stage has heralded a surprising range of emotions. The tantrums we've already experienced, but now he can go from a standing start to a full blown tornado of anger or upset. He is also speaking fluently and using a lot more words - well I understand him anyway - so it makes for animated conversations when he isn't blowing up because I won't let him drive the car. Today two things happened that made me realise how much my boy is growing up. 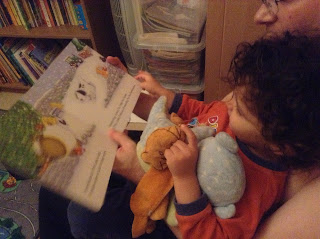 Firstly, his small chewy flannel toy (Ellie, the elephant) was lost in the supermarket. I searched all the aisles and at one point had most of the staff looking for her too, but to no avail. A mother pushing a trolley round frantically asking, "where's Ellie ?" often causes concern as people have in the past asked me if she is my daughter. I felt sick in my stomach at the thought that we had lost the toy he'd had since he was born and that he slept with as it smelled comforting. Even though she was filthy and smelly she was also clearly loved by someone very much, so I hoped that she'd get handed in. A while back I bought some spare Ellies as a contingency for this event, so he has once met a replacement when the original was in the wash. Today as I got more and more distressed I told him that Ellie was lost and I was very sorry, he looked at me and said, simply, "new Ellie at home."

Later after lunch I let him have a mini roll as a treat. He hasn't had them before so I wasn't sure if he'd like it, but he seemed to as it was gone pretty sharpish. As I went to take him up for his medicine and nap he asked if he could have some chocolate. I reminded him he'd just had a chocolate covered cake. He went quiet. I said, " you just had one - remember ?" and he looked away from me and said, "No." I laughed and he gave me a very serious look and said, "No" again.

So today I have learned that my boy is mature enough to deal with loss (more than his mother) and that he will lie for chocolate.

I could not be more proud :o)