Foodie Friday: The fable of the frail frying pan

I have had a domestic disaster. Not a dishwasher / washing machine breakdown, or a cooker failure. Not even a fridge / freezer packing up (thank goodness - there's only so much frozen food we can eat and I'm pretty sure that even Hubbie would grow tired of fishfingers, garlic bread, peas and ice cream eventually !)

Nope it's none of these actual life altering disasters, it's a really minor and, therefore, exponentially worse one. The non-stick has gone on my small frying pan !! 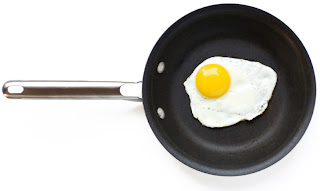 I first noticed the other day when I spent an inordinate amount of time scraping an egg off the pan (with a non-metal spatula of course - I'm not a neanderthal !) and I put it down to my having the heat on too high under the pan. Then it took three attempts to get the pan clean (again not using a scourer, but a gentle cleaning sponge - this is not rocket science you know !) When I used it again yesterday I had the same, no actually worse, results with a badly scrambled egg mostly stuck to the pan. It wasn't as bad as the ones you see on Saturday Kitchen, admittedly, but it was not appealing to the palate.

I have another non-stick pan, but it is far larger so this one was always my go to pan for small things like an egg just for me or an omelette for lunch. Without it my attempts at healthy eating are foiled by laziness and the temptations of ready made foods. Why cook something without fat if you can just go to the shop and pick up something in pastry ? Frying pan as a dieters best ally may sound counterintuitive, but it's not, as any woman who's tried to lose weight on a low fat plan will tell you - and there are a few of us out there. Cooking with little or no fat means being able to eat 'fried' eggs and omelettes rather than foraging for food after an unsatisfying Ryvita and cottage cheese 'meal.'

It's not just the fat reducing qualities of the non-stick pan though. A few years ago I replaced my ancient collection of pans which I'd had since I went to University (and they were old then !). I'd been given gift vouchers for my 40th birthday so I decided to spend them on nice pans that all matched instead of the eclectic and 'pre-loved' looking ones I had. These ones are simpler to wash and aren't dented and discoloured from years of use. They haven't developed that distinctive smell that the old ones had which made all food taste vaguely the same. 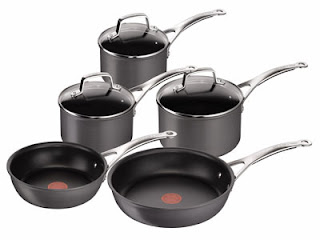 In the short term it looks like I may have to use spray oil to coat the pan before cooking anything in it. If it is beyond reasonable use I may have to call on the guarantee that these things have when you buy them. The problem is I have no recollection of when I bought the thing and am only a little bit sure where I actually bought it. Worse case scenario I have to get a new one. Oh well I have a birthday coming up so I can always hint that I want one as a gift can't I ?

Like I said it's hardly an insurance matter, but this mini drama has rocked my world.

Wow I really do need to stop being a stay at home Mum don't I ?