Foodie Friday: My final fling - in the kitchen. 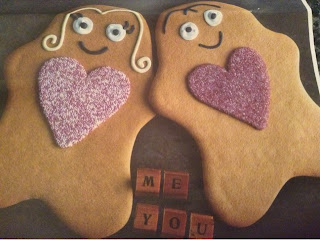 After much to-ing and fro-ing about hours and start dates I'll be back in the world of the working from next week. I am very nervous about it, but not because I'm worried about the boy. He will be doing an extra day at nursery and will be taken care of by his beloved Auntie or Hubbie on alternate weeks to cover the other day. This means he's taken care of from breakfast until teatime and I am let loose on the world from the time I drop him off to when I pick him up.

This week I've been making the most of our time together and it has been fraught at times. Apart from his ability to go from zero to high pitched tantrum and back again in seconds (just like his mother) he has also demanded a lot of attention from me as if he knows I'm going to be away from him. To counter this I've been baking and making things he likes. We made some oat and raisin cookies this week and he helped add the ingredients and stir the mixture as well as being the official taster for me. In my kitchen I keep a small ringbound notebook in which I store my most used recipes. Top of the tree is the perfect oat and raisin cookie recipe, by which I mean the ingredients list is less than half the page and it contains no more than one ingredient I haven't got already. 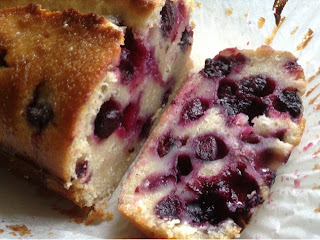 Even better is when I have a recipe that actively uses ingredients I have hanging around. I made a cake from frozen blueberries, fresh lemons and some butter that needed to be used up and apart from realising too late that the baking powder was past it's best it turned out pretty well. Hubbie likes it served with ice cream as a dessert so I've frozen it and will come back to it when the latest batch of cookies is finished and we are in the market for cake again.

Equally popular is the definitive banana bread recipe which uses up bananas that are past their best, freezes brilliantly and is just right for a packed lunch treat for Hubbie or a post work/nursery snack for the boys. I made it this week with fewer bananas and different butter and for the first time I actually enjoyed eating it too. I usually don't eat cooked bananas, but for some reason this one just hit the spot for me. I won't make a habit of it though as even with a walk up three flights of the narrowest stairs in London to get to my office won't counteract the effects of cake gluttony.

I am now faced with the prospect of taking a packed lunch to work again - which is tricky as I don't particularly like sandwiches. Hubbie has taken the same packed lunch since I've known him - he doesn't like change. I managed to swap out full fat for half fat crisps a few years ago and that was so traumatic for him that I daren't suggest any further substitutions for fear of the need for therapy. I suspect it's going to take a few tries before I get it right for me. After all I have to take my breakfast, lunch and possibly an afternoon snack with me as I'll be out from when I take the boy to nursery for breakfast until I pick him up at his dinner time. I can't eat too early in the morning so unless I have something healthy with me I risk a meltdown and low blood sugar late morning resulting in some very poor nutrition choices with so many cafes and coffee shops in Farringdon.

Cooking dinner may also require some forward planning as I'm not sure how inclined I'll be to roll up my sleeves and prepare food from scratch after a day at work. One of my favourite meals to prepare is the fastest veggie chilli recipe I have. It uses up leftover veg and always stretches to at least one more meal so it's efficient and timesaving. This is one where I pretty much pop all the ingredients into a large casserole dish and leave it to simmer with the occasional stir to stop it from sticking. Again it freezes really well so can be kept for a future date or an evening when Hubbie is out at football and I can't be bothered to cook just for me.

So from Monday wish me luck with my new venture and pop a metaphorical note into my lunch to tell me it's going to be ok.

I'll try not to eat it by mistake :o)