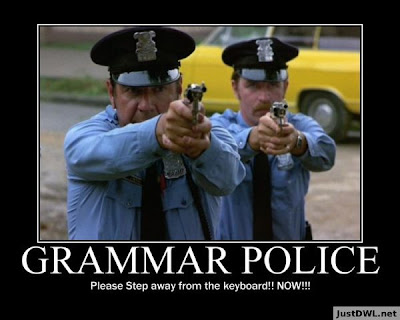 My favourite misunderstanding this week was heard on Radio 4's Today programme when a reporter said, "cocaine growers say police make bad neighbours." Now had he used the correct intonation it would have sounded like, "cocaine growers, say police, make bad neighbours." Alternatively he could just have used better syntax and there would have been no confusion. It may be just me, but this kind of thing does stick in my mind.

I find it interesting that with the popularity of social media people are using the written word more visibly and I am now judging people I know on their use of grammar and punctuation. I appreciate that the brevity required to make a point in 140 characters can lead to some contracted words, but the paucity of some people's language really shocks me.

Now, I'm not expecting high literature, but some basics would be great. So as a rough guide please spare me the following:

"definately" - I will hit you and then hit you again - hard

"first world problems" - honestly, you're making this easy aren't you ? just stand still so I can hit you repeatedly

"epic fail" - used ironically just about ok, otherwise - this is hitting with a large spade material

"you can talk to myself" - no I can't, really, because I have already judged you to be a dunce and this will not end well. 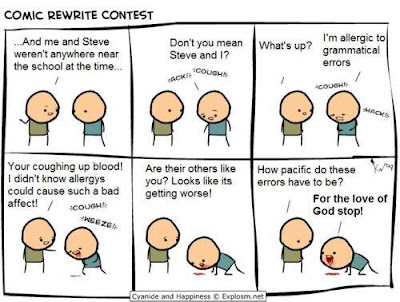 That's a start. Just work on these for now and we'll get to the more complicated ones later.