I'm on a new crusade. I wish it was as worthy as finding a cure for a serious illness or saving the Earth's precious resources. Instead it's something that I took for granted would be simple. Feeding my son decent food.

In the beginning it was simple enough, I breastfed until he chose to stop. That way he ate when he was hungry and as much as he needed. Then when it came to weaning I always took food with us wherever we went so I knew the provenance of what he ate and there was a pretty good chance that he'd eat it. At nursery he is encouraged to try new things and has developed a taste for foods that I haven't tried to give him so it has widened my repertoire of what to offer at mealtimes. 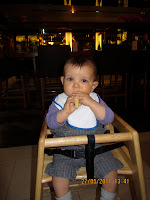 When we are out and about - which is most days as he is a very energetic child - I always carry fresh fruit for him and if we are passing a shop or a market I know I can get him an apple or a banana as an instant snack. We've taken our son out to eat with us since he was born so he is used to the formality of dining out. He has been to the Champagne bar at St Pancras Station, Pont De La Tour by Tower Bridge and is a regular at our favourite local haunt Apatura where he has his own table and they even let him wander around between courses. All of these are restaurants for adults and he eats what we eat only smaller portions. Except at the last one where he gets the biggest plate of pudding I've ever seen so I often have to 'help.'

Establishments that offer a menu specifically for children baffle me. If I want to feed him lunch the children's choices appear to be: pasta smothered in melted cheese, breadcrumbed everything & chips, chips, chips. Of course my son loves chips - he is my son after all - however, he also loves risottos, biryanis, spicy curries, minestrone and vegetable soups, toasted bagels, chapattis and singapore noodles. 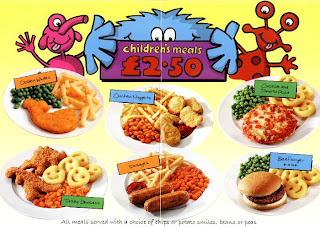 I get that pasta and chips are cheap and easy foods to prepare so that is why they are prevalent on all menus, but the dishes my son eats are all simple to prepare too. Additionally they can be made with low cost ingredients and can be made in bulk thus creating economies of scale. Yet they just don't appear on the children's menus I see.

The last straw was this week at a local kids' cafe with soft play. I've never been before, but heard it was good and all the signs around the counter promised 'freshly made on the premises' food. What we got was a scalding hot plate of microwaved pasta with a smattering of insipid tomato sauce and watery meatballs. He proclaimed it was "too hot" then when he tried the meatball spat it out in disgust. He NEVER spits out food. It was appalling. My own lunch was as bad and it inspired me to try something.

Can we use our collective wisdom and experience to create a good food guide for kids ? I remember the places that take care of my son and tell everyone how good they are. Hence my glowing recommendations for Apatura in South Croydon - they treat us well and we love eating there.

If you are disappointed with the food you are served for your child tell the owner (nicely) and give them the chance to improve. The places that are no good I just refuse to eat at again. I don't want to badmouth them on a forum - that achieves nothing. The power we have as parents and carers is immense. Let's use it wisely.

Our children deserve much better food.

If you know where it can be found please share below.

Email ThisBlogThis!Share to TwitterShare to FacebookShare to Pinterest
Labels: children, food, my son