Does the boy eat chicken ? or My Big Fat Punjabi Family 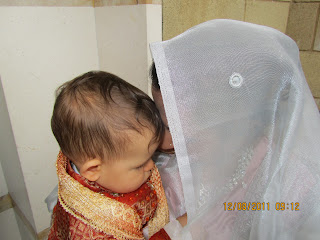 I'm sure there are some films you watch repeatedly, either because they have meaning for you or they star someone you love watching or they just make you laugh. My Big Fat Greek Wedding was on the other day and it's a film that I missed on cinema release that I never really appreciated at first. It's grown on me since and it's only now I realise this is because I see it as an instructional film for anyone considering a cross-cultural relationship / marriage. In fact it could almost be about my own family the similarities are so startling.

There's the character of the father who is convinced everything is Greek (or in my Dad's case indian) and his constant sobbing refrain "why is she doing this to me ?" The enormous family that are noisy, in your face and inappropriate. I have aunties who used to say "it's good to have a long nose, it suits you," genuinely believing I needed to hear that. This appears to be an inbuilt need to 'advise' on appearance which is also evident in the scene where on the morning of her wedding Tula is surrounded by noisy female cousins and aunties bleaching and plucking facial hair while fussing around the sudden appearance of a spot.

I was spared the one cliche from the film that is also a truism of cross-cultural marriages, the poor new lad being tricked into saying inappropriate words to his new family. As I'm the one sibling who is fluent in punjabi it was unlikely Hubbie would learn any swear words from me. Now he is learning from our son who uses some incredibly cute crossover language that is 'Pinglish' or an amalgamation of punjabi and english.


Of course I've mentioned before how there are always mountains of food when we visit my parents or other family and my husband's first visit to my Mum's home for lunch was a lesson in why indian women outlive their husbands. Mum hovered over Hubbie ensuring his plate was always full (while simultaneously cooking chappatis) so he learned to always go to their house on an empty stomach in the future. The first time my Dad met Hubbie he asked (in Punjabi) "does the boy eat chicken ?" (I don't so it was a fair question) and when it was established that he did I think he passed.

My favourite similarity from the film is when Tula's father presents the bride and groom with a wedding gift of a house. These grand gestures are very indian and I still cringe when I recall being a guest at a wedding where the father of the bride presented his terribly embarrassed daughter and son in law with a comedically big cheque like they'd just won the pools or something. 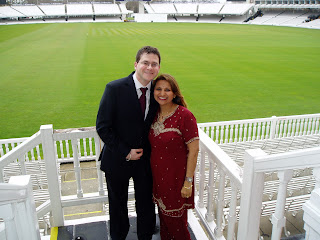 I admire the bravery of the men who've married into my family. Some didn't make it, but the ones who did have hallowed status. Hubbie is no. 1 son in law - especially since he is also Daddy to their first grandchild. When we visit Mum always makes his favourite chicken. These days she spends less time watching his plate as my son gets lavished with all the attention, but Hubbie still leaves feeling stuffed.

The one line in the movie that sums it up for me is when Tula's auntie looks at Ian and says proudly, 'he looks Greek.' When we stayed in India with my beloved late grandmother she was so taken with Hubbie she said, 'of course he's Punjabi.'

It was the most I could have asked for and made me so proud.