Just the socks to rearrange then I can start on the spare room...

It's that bit between Christmas and New Year when I have set myself impossible goals to achieve while Hubbie is at home. Instead of actually sorting out the paperwork in the spare room I'm procrastinating like a professional by rearranging my wardrobes and sorting my son's clothing drawers. Next I'll be baking banana cake and fudge just for the sake of using up the butter !! Actually I did look up a recipe this evening to use up some ingredients I have knowing full well what I intend to do with them, but it kept me busy for over an hour. 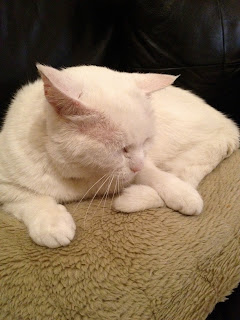 I always overestimate how much I can do with Hubbie at home. I'm actually far more productive when he's at work and the boy is at nursery as they aren't distracting me with their arguing, mucking around and general 'boy noises.' It's great hearing my son giggling away and the cat usually keeps me company and plonks himself on his beanbag or the nearest soft surface. I know we should probably be doing holiday stuff like trawling the sales for things we didn't want at full price, but I have a garage full of 'bargains' that I have to get rid of so I'm loathe to get any more of them.

Yesterday evening we went for a drive to see the Christmas lights in a street that was featured in the paper for having impressive decorations. When I was a child it was a family tradition that my parents drove us into London to see all the Christmas lights and my Dad would stop the car so we could all get out and look at the windows of Selfridges, Hamleys, Dickens & Jones and Harrods. It was a great night out and we really enjoyed it so I wanted to give my son a taste of what that was like for me growing up.

As we pick Hubbie up from work most evenings me and the Boy look for festive lights on houses and he now yells "Christmas liiiights !!!" as soon as he spots them. I like that he gets excited about the small things in life. Just as it has become a regular thing that we listen to the Big Ben 'bongs' at 6 o'clock in the evening and we both go very quiet just before the chimes then we take it in turns to do the best impersonation of Big Ben that we can. He usually wins by dint of sheer enthusiasm. Daddy is joining in while he's at home and he has a style all his own too.

So, I'll do the spare room tomorrow - either that or I'll rearrange the downstairs furniture again.

Email ThisBlogThis!Share to TwitterShare to FacebookShare to Pinterest
Labels: Christmas, my boy, son