Why my boy is like a tiny Russell Brand 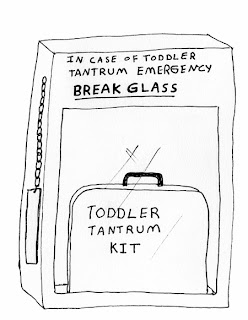 It's been a difficult few days with my boy. His tantrums and moods have been almost constant. He pretends not to hear me and turns his back when he doesn't want to do something. He shouts and yells and runs off. He pushes me to the end of my tether (which is unsurprisingly short right now) and then looks really hurt when I am upset with him.

Then on Thursday we went to see my sister for her birthday. I was really worried about how he'd behave as he'd been horrific that morning and by the time we got to my Mum's house he hadn't improved any at all. I was so tired out that I left them to observe his 'naughty day' and didn't say anything to him and let them do all the repetitive instructions, 'don't touch that, put that down, etc.' Then my other sister invited us to come to the theatre where she works to watch Room on the Broom based on the book by Julia Donaldson. I've always said that I wasn't sure he'd have the concentration to sit through a show so we've not taken him, but this time I had my Mum and both my sisters to help keep him in check so I thought I'd risk it.

We made it just in time for the show, found our seats near the stage and he sat in his seat with his legs folded and his beloved bear clutched to him. Then it started and the actors were talking to the audience and he interacted. When they imagined a witch flying overhead he looked up. When an actress asked who'd like to try some of her porridge his hand flew into the air and he mimed catching it, eating and said it was "yummy." My boy was a delight and he was singing the songs in the car on the way home.

Then yesterday and today he was back to his belligerent self and I just shook my head and gave up. This morning he woke up yelling at 4am and I went in to check on him. He went back to sleep and so did I. Then at 6am Hubbie woke up yelling, so I tried to work out what was wrong with him too, he went back to sleep, I sort of did too. I was glad I had plans without them today. I needed to be away from them both just for a few hours and Hubbie always takes him out on a Saturday anyway so I didn't feel too guilty.

Tonight the boy was erratic and tearful at bedtime, he ran off and went up and down the stairs and I was so fed up with it all that I said I wasn't going to have our sitting in the chair bedtime chat tonight. He said that was fine. Then a few minutes ago - after we'd finished watching Dr Who we heard some squealing from the monitor. I turned the sound on the TV down and it was the boy crying and calling, "Mumma." I took a deep breath and went upstairs to see what new antics these were.

When I got to his room he was standing on his bed shaking and crying and clutching two bears really tightly to himself. I held him and managed to prise one of the bears from him and held him close and asked if he'd had a bad dream. Eventually I calmed him down and sat with him in my arms singing softly until he'd stopped shaking and was ready to go back to bed by himself. I recalled how I'd had a nightmare the other night that left me shaken and confused - I'm 43, he's only 3. 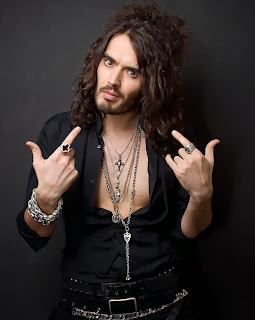 So however hard I'm finding his emotional outbursts or his seeming belligerance I have to remember he's only 3. I also have to remember how amazing it felt to watch his imagination in full flight in the theatre the other day. I have to remember what Russell Brand said about the death threats he received when he was planning to do some comedy gigs in the Middle East, "I'm just trying my hardest."

When I find my boy wearing or taxing or just a bit too much I'm going to think of him as a tiny Russell Brand. At times he's unpredictable, his hair looks crazy, but he smiles a cheeky smile and wins over a lot of people. He's just trying his hardest.

I draw the line at him wearing snakeskin boots and skinny jeans though. Oh, and the public nudity.