Pinch Punch first day of the month (and no returns !!) 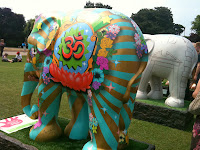 I know it's past midday, so strictly speaking I can't do the whole pinch punch thing, but I'm going to anyway. Who made that rule by the way ? Does anyone know ? Is it universal ? Anyway, that's not what this post is about. Like a lot of people I cannot believe it's November already. Not just because this means it's Hubbie's birthday next week and my sister's birthday later this month, but because it means we're almost done with this year. I still haven't got the hang of writing 2013 yet and before we know it's going to be over. Maybe that is a good thing as I might do better with 2014 than I did this one. Last year was signified by the Olympics and Paralympics, but this one didn't have anything quite so grand going on so it seems to have just gone past without any particular fanfare.

In addition to family birthdays this month we also have Diwali which is a big thing in my family and I'm excited that my boy is old enough to enjoy it this year. We're taking him to visit my Mum on Sunday and he'll be fed to within an inch of his life and he'll get showered with presents. My own memories of Diwali (in common with most indian celebrations) are all about the food, but here's my beginners guide to the festival of lights:

1. There will be food. Lots of food. Most of it sweet, or fried, or both. If you're going to visit indian people don't eat beforehand. Seriously, you may need a stomach pump if you try to be a hero. Hubbie learned this on his first visit to my parents and has never made the mistake again. He prepares by fasting for around a day and a half before a visit to the in-laws now.

2. Presents. You get them and give them and hence it's known by some people as the indian equivalent of Christmas - it's not, but I won't go into that here. It is, however, a chance to buy and wear shiny new clothes and for the indian lads in Southall an opportunity to drive slowly up and down the Broadway calling out to all the girls in their finery. It is primitive I know, but hilarious when the feisty girls put them down in their inimitable fashion.

3. Cleaning. Now if you know me at all you'll know that I am partial to a bit of cleaning so this is almost my favourite part. The idea is that you clean the house from top to bottom in preparation for a new start. I'm doing it tomorrow - I'm really looking forward to it. Don't call me, I won't reply, this is my therapy. I feel you judging me - I just don't care. 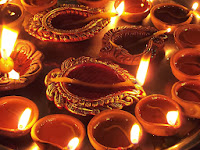 4. Lights. On the actual night we put a nightlight in every room in the house and some outside the doors to welcome the light in and keep the darkness out. It's a lovely tradition, apart from the one year that the nightlight burnt through the toilet cistern in my parents' house and I woke my sisters up as I'd smelled burning - we didn't have a smoke alarm - it was all a bit dramatic really.

5.  Fireworks. When we were kids we always had two bites of the cherry with fireworks as we'd have some on bonfire night and even more on Diwali. My Mum would always buy twice as many and we'd choose the best ones to save for Diwali night. You know the catherine wheel and rockets and stuff. Sparklers and bangers were just the opening act. My Dad went all primal with the fire side of things and it was truly terrifying watching him ignore all the safety rules, but he remains intact so his dangerman approach did no harm in the long run I guess.

If you're celebrating Diwali I hope you have a wonderful time. I'll be telling my boy all about it and hoping he's as excited as we used to be about it all. I know he's going to love the food, the lights and the presents.