Hear Hear - the search for the perfect earphones

This blog post started out as a conversation on Twitter with my fellow Croydon Radio presenter Janet. She was bemoaning the poor workmanship of Apple earphones and the tinny sound leakage that haunts all users of public transport. If you've been on a tram, bus or train you will have heard the familiar and annoying "tsch tsch tsch" of someone else's music. I know this because I am pathalogical in my wish to avoid inflicting my music on anyone else.

When I was a teenager with my first Sony Walkman I used to sit in the back of my parents' car listening to Tracey Chapman using headphones - you remember those ones with foam pads the size of a coaster ? - and they never knew I couldn't hear them talking to me as there was no tell tale sound coming from the back of the car.

Now we have competing sounds from one end of the tram to the other and it's not all teens with noisy tunes in some cases it's grown ups too !

For my own part I use earphones to listen to downloaded programmes rather than music these days. However, I have an issue with the earphones. I don't use the ones that Apple make as they are so incredibly uncomfortable and keep falling out of my ears. Hubbie has bought me some 'Marshmallow' ones that are a fetching shade of purple, but they are also very painful to wear so I can't use them for too long. I've long since stopped listening to music while running as the only earphones that would stay in place are ones with a bit that goes all round the ear and they look awful and don't really work all that well either. I want some with good sound quality, comfortable fit and that allow for some movement. If they fall out of my ears as soon as I stand up they're no good to me. If they look cool as well, well that's a bonus :o) 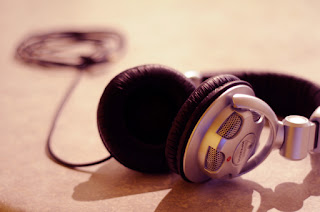 Then yesterday my friend Neil posed a question on Facebook asking if it's just him who gets through earphones like other people get through toothbrushes (my words not his). In fact built-in obsolescence is a pet peeve of mine and shoddy earphones or dodgy wires have been an issue in the past when I used to have to replace my headphones regularly because I listened to music on the move every day. It's the sheer usage that requires we use better hearing apparatus isn't it ? I've seen men (it's always men in my experience) wearing massive headphones plugged into an ipad or iphone so that we all know just how seriously they take their movies / music. Having said that I am considering asking for a pair for Christmas.

Of course what we're all doing when we put our earphones in and switch the music / movies on is tuning out the world around us. A few weeks ago I was taking the train home as usual. An elderly man had moved aside to let me sit by the window and I was about to plug myself into my ipad to watch a sitcom. Then the man started to talk to me. He told me he was travelling back from up North where he'd been visiting the mining town where his grandfather had lived and worked. He was delayed so wasn't going to get home to Worthing until well after 9 o'clock now. I discreetly put my earphones away in my handbag and turned to listen to him and I noticed that a few passengers were giving me and him funny looks. One young woman was half smiling in a pitying way as if feeling sorry for me. Then as our journey progressed I noticed that a few people stopped listening to the sound in their ears and instead they were looking at Peter and listening to him as intently as I was. By the time we got to my stop most of the carriage was captivated by him and when he said sorry for being slow to stand up I reassured him no one minded and there was nothing to rush for as we were all more than happy for him to get up in his own time. I thanked Peter for talking to me and waved bye to him before I made my way to the tram stop with a huge smile on my face. Just this once we all chose to unplug and listen to a real person and not close off into our own private world. 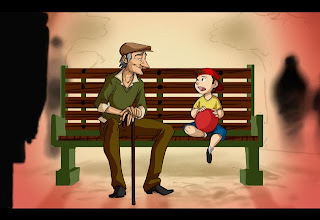 For the times when I do want to plug in and zone out this is an appeal for some recommendations for good headphones.

If you have tried and loved any headphones / earphones do tell me all about them and hopefully I can find the perfect fit for my funny ears :o)