Last night me and Hubbie went to a work in progress gig by Mark Thomas called "100 minor acts of dissent." The last time we saw him was at the Tricycle Theatre in North London here he was launching his manifesto shows. There was a very serious policy in terms of holding the Mayor of London to account for failing in his promise to fund rape crisis centres in the city, but the one I recall most was the one to standardise the colours of crisp packets so that Walkers can't just randomly decide that salt and vinegar is green when - as everyone knows - it's blue. The politicians present were all in favour of this. 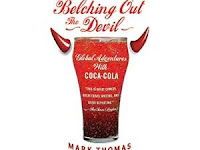 Over the years I've been influenced by Mark Thomas's work as I've boycotted products from certain companies and taken a stance on issues he has highlighted. In terms of ideas I like his approach that asks the audience to participate and get involved. Now, I'm not about to walk the barrier that separates Israel and Palestine, but I am very much on board with his new project.

The idea is that we do small things to show we're not in support of how things are. So when bankers or tax avoiders say they're going to leave the country if they're called to account we offer to drive them to the airport. You can go online and sign up to be a designated driver - seeing as we live only half an hour from Gatwick airport I feel it would be remiss of me not to sign up to do this.

One of my favourite ideas is to sticker bomb books in the big bookshops using these specially printed stickers (made to look like the originals). The idea is to do it surreptitiously and to take a photo that is shared to show it's been done.

Another idea I loved was to heckle books by including little pieces of paper that spoil the ending for you in books that aren't worth the effort of reading. I won't tell you too much as he tells it so much better in the show.

In the past Thomas has confronted Nestle and Coca Cola for their less than ethical stance on working practices. Now he's gone a step further and taking a policy from the manifesto shows has produced the opposite of the fairtrade logo in the form of the 'bastard trade' logo for firms that are the antithesis of fairness. The idea is you pop these stickers on items and take a pic to add to the others that will form this year long project. Of course it's not all stickers and petty vandalism. It's also about being part of a protest movement, but one that middle-aged people can feel good about.

I managed to interview Mark for my radio show and was delighted to be able to follow up on some of the things he talked about - from taking his teenage son to watch the Fall to regularly being mistaken for Mark Steel (who I'll be interviewing early next week). 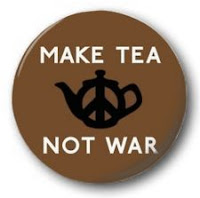 The main purpose of this post though is to reiterate the message that a lot of small actions can have a big effect. It won't necessarily change the world, but it might just reawaken the rebellious teenage spirit that you thought was long lost with that pair of Dr Martens that are gathering dust because you can't wear them to an office job and be taken seriously.

I'm also a sucker for small badges with slogans on them - what can I tell you ?

To find out more about this go to: http://www.markthomasinfo.co.uk/