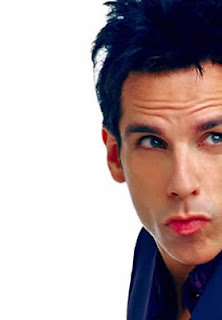 Do you remember that bit in the movie Zoolander where Derek has just lost the award for Male Model of the year to Hansel ? He looks into a puddle in the street and asks his (really, really, really, really, ridiculously good looking) reflection "who am I ?" then he goes back to his hometown to become a miner.

Well, I had a Zoolander moment today - except for the really, really, really, really, ridiculously good looking part and the being a miner part - I stopped for a moment and asked myself 'Who am I ?" I have to conclude that I'm a bit like Derek in my confusion right now.

First thing this morning I was outraged as I thought someone had tried to pinch my interview with Mark Thomas for my radio show - it was a misunderstanding, but for a little while I was Mrs Angry

On the train to work I called my parents to sort our the logistics of the boy and Hubbie visiting them without me later in the week. My Dad got all confused when I said I wasn't going and asked "How will the boy get here on his own ?" I said, "He'll take the bus of course" - this was me as the Joker

As usual I was first into the office and I was firing on all cylinders from the minute I walked in, replying to email, phone calls, popping the kettle on and even found time to visit the venue for tomorrow evening's event. Yep it's  Me the Multi-tasker

I rediscovered an old uni friend on Twitter who said that my being a DJ bestowed coolness on me which I don't think I deserve really. Even so I'm fairly sure I can claim my status as Radio Presenter

I went to pick up my boy at nursery and as I walked through the gate I heard him being told off - I then had to have the conversation with a staff member who told me that he's been pushing and hitting other children today. I was Mortified Mummy

Hubbie and the boy were not getting along during bathtime and bedtime and there was a lot of shouting going on. I spoke to both of them separately to explain that they needed to be more patient with each other and to make up by being nice and kind from now on. I'm the Peacekeeper

Finally dragged myself to my exercise class for the last of a 6 week course of high impact interval training. At the start I thought I was going to fall asleep, I was so tired, but by the end I was exhilarated and good tired. I think that makes me a Loony in Lycra 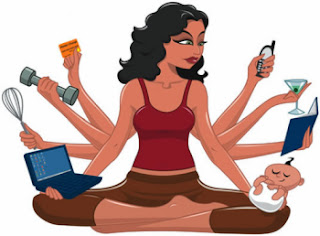 So my conclusion at the end of all this self-reflection is about as profound as Derek Zoolander really. I'm a lot of different people in one day. It's just that today I've been a few more than most.

Oh, and I almost forgot, the one that you know me as most of all - Blogger

No wonder I'm so tired all the time !

Email ThisBlogThis!Share to TwitterShare to FacebookShare to Pinterest
Labels: Mum, my boy, radio