"No, my NCT group didn't bond at all." It's the truth we don't tell isn't it ? We're supposed to say that they are the backbone of our friendship group. The ones who kept us sane during the baby bit and who we still have coffee with once a week even though Sabrina went back to her job straight away and Melanie and Mike (the nice ones) have twin babies now as well. Well my group didn't get on from the first meeting - we were all perfectly civil of course (we're not animals), but we weren't about to start meeting up for tea and baby chat and that was clear from the off.

I hadn't actually expressed this out loud until last Friday night. I met up with a friend I haven't seen for years - well not since she had the first of her two children - and we were trying to catch up on around 5 years in a few hours. We had a rapid and wide-ranging discussion that encompassed; our kids, our husbands, going back to work (or not), how long was it since we last saw each other ? the family support we have around us and the groups that we take our kids to. It was during this that she asked me if I had bonded with my NCT group and I uttered the words that you're just not supposed to say. Now, I realise that not all parents choose to go to the NCT pre-natal groups. If you do there is this mythology that they will become your best friends throughout the whole birth and after process and you'll be friends for life (well until you go back to work anyway). 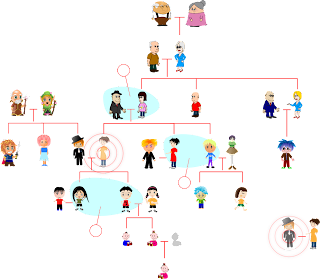 Then it occurred to me that our parents didn't have this option and both my Mother and Mother-in-law have been very honest about how lonely it was raising their first child. Neither of them had family nearby to help and both of them were isolated and caring for a baby without having their own mother around to help or advise. Neither my nor Hubbie's family live nearby so we don't call on them for day to day childcare, but they have been massively helpful with raising our son. My sister still takes care of my boy which enables me to go to work knowing that he is with someone he loves and who loves him. As we are fortunate enough to have families that are pretty internet savvy we use Skype so that they can chat to our son and see him running around playing at home when we can't get to them in person.

We have a great relationship with our neighbours who are very kind to our boy and help us out with childcare so I haven't really felt the absence of that group support that the NCT gathering is renowned for providing. I'm not critical of the NCT, far from it I think it's great and the course we did was invaluable in teaching us so many things we had no idea we didn't know. In fact I still keep in touch with my tutor and have met up with her a few times as well as interviewing her on my radio show. The other parents though, were a different story. I think it comes down to the twin issues of Hubbie's disinterest in 'joining in' and my seeming incompetence at 'fitting in.' Hubbie isn't bothered about making pals with new people so he is friendly, but not trying too hard. Me, on the other hand, I'm trying far too hard. I offer to make tea for everyone, make crappy jokes intended to lighten the atmosphere and talk far too much. It's only when I see people glazing over at another 'interesting' bit of info I just had to share with the group that I realise I've done it again.

What I've always wished for is that effortless cool that I observe in others. Those folk who just ooze confidence and social magnetism and whose entourage hang on their every word. I always desperately wanted to be non-conformist as I knew I wasn't going to be part of the popular crowd. At school this meant making my own clothes (not all of them, just the crazy stuff like a puffball skirt that I'd seen on the Clothes Show), spending ages on decorating my nails and doing my hair differently every day. At university I went a whole other way and found a few groups that I could be part of - the university newspaper, the radio station and my friends who I went to gigs with and dressed the same as. The latter were also the friends I lived with and it was very confusing when the washing consisted of similar goth skirts, black tights and floaty tops only discernible by the different sizes. 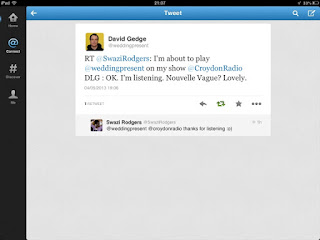 Now that I'm a grown up I have learned to embrace my conformism. I like it actually. I still talk too much and I still share too much. I still think that people who like me must have got it wrong. I slightly mistrust them for not knowing better.

So imagine how amazed I was that one of my Twitter followers is Dave Gedge of the band The Wedding Present. Then last night during a radio show I was presenting I tweeted him to say I was playing one of his songs and he tweeted this:

I'm not sure it makes me cool, but it does make me very happy indeed.