See that bloke doing really old jokes ? That's you that is. 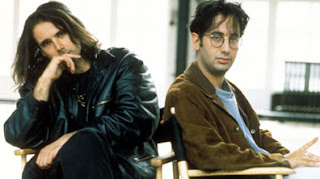 This time last week I was in Leicester Square watching Rob Newman try out his new show in advance of a tour and a new book. You may remember him from The Mary Whitehouse Experience or the "comedy is the new rock and roll" gig he did at Wembley Arena with David Baddiel before they famously split their highly successful partnership. Baddiel went on to present football shows, write a hit football song and mediocre novels.

Newman went on to write even worse novels, a lot of very worthy gigs (anti-sweatshops, eco causes, etc.) and all the while I was supporting his fading star while recalling his past glories. The unfortunate thing I found last Monday was that he seems to be doing the same. We had heard the majority of his jokes before and while the political haranguing and history lessons may be new material the impression of Jarvis (sleazy character from way back when) the neighbours with sinister sounding voices and the whole schtick that held the serious stuff together was maddeningly familiar. One member of the audience was clearly so put out about this that he kept stealing a march on the punchlines which is unkind, but less rude than the woman who walked out saying she was going to kill herself instead of still watching. 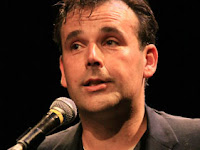 Most of the audience had heard all this before - you would hardly pay to see a once well known comic doing try out material in the West End on a Monday night unless you were a fan of his would you ?  So it was merely politeness that we laughed at jokes we'd heard many years ago and maybe a misplaced loyalty to him as we guess he probably needs the money. However, loyalty is one thing, blind faith or fandom is entirely another.

Hubbie has a few pretty strong convictions, the number one of these is "never meet your heroes." I first realised this as we were queuing outside the Hammersmith Palais to watch The Fall play the last ever gig there before the venue was redeveloped.  As we waited outside a shambling man in a leather blazer walked between us in the queue and I spotted that it was Mark E Smith - Hubbie's musical hero. I asked him if he wanted to speak to or acknowledge him and Hubbie shared his number one mantra with me. Bearing in mind how unpredictable the Mr Smith can be it is no bad thing to leave him be as you have no idea what state he will be in on any given day. On that day he performed pretty well, but was mistaken by  security for a drunk audience member and almost didn't make it back onto stage after a short break. On other occasions he has disappeared during a gig and not reappeared at all, so that wasn't so bad on balance. 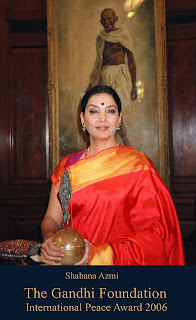 Of course if I was to meet an actual hero of mine like Maya Angelou I'd be completely tongue tied and incapable of speech. That's how it goes in real life. I was once asked by Shabana Azmi if I could lend her £5 to pay for a taxi as I waited outside the QE2 centre to go into a conference at which she was speaking. I did that thing where you move your mouth, but words don't come out and took out a fiver from my purse to give her. This does beg the question what journey in Westminster costs £5 that it wouldn't make more sense to actually walk ? Also, do I have a face that looks like it would proffer a fiver to a stranger (albeit a movie actress and now campaigner for women) or did she choose the most obvious person who'd help her ie. an asian woman ? No matter, I was happy to help her as I knew my Mum would be chuffed when I told her about it. An hour later when she sought me out to return the money I was equally eloquent, having spent the whole intervening period thinking "well there's a fiver I'm never going to see again." I was touched that she remembered me and that she made a point of giving the money back - it made me feel very warm towards her. So when I retell the story now it's with a little embellishment and we are now the best of mates. It's not like anyone will check is it ?

Unless you are reading this Ms Azmi, in which case thank you :o)