Well, thank goodness that's all over !

Firstly Happy New Year !! I hope you've had a super Christmas and that your New Year Celebrations were enjoyable. I've been a bit quiet for the last few days as I've been pondering some things that I've learned from this holiday season (to get all american about it). I have also started planning next Christmas and New Year. If you think this is a bit keen you have to understand that I am not really a long term planner, but I'm not leaving it too late for a good reason. 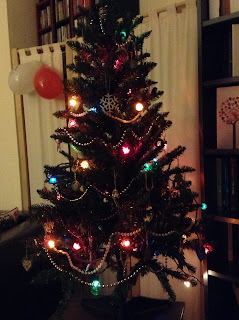 In the past we've alternated visiting parents to make sure no one feels left out. Both my Mum and Hubbie's say they don't mind when we visit so long as they see us, so we decided that this year we would make sure that all the grandparents got to see our son on Christmas Day. We had to be especially organised about it so with a Travelodge booked for me and Hubbie on Christmas Eve the boy stayed with my parents and we collected him in the morning to go to the in-laws. I cried buckets watching the Snowman and the Snowdog and we had a lie in while my parents were treated to a 6am wake up call from the smallest snowman. We came to get him and he fell asleep on my shoulder so all the plans for him to sleep on the long drive to Granny and Grandpa's house were dashed. He was delightfully sociable in all settings though and entertained everyone and made me and Hubbie smile as he said "oooh" while opening all the lovely presents he received. We took him for a Boxing Day walk with Grandma to see the ponies in the New Forest and he was adorable. My son being so gorgeous and friendly made being with the family bearable.

This is my guilty secret and I am going to share it with you: I don't do well with family gatherings. In my head they seem a good idea and I forsee a fun time for my son and for those we visit as they seem to enjoy spending time with him. What I don't factor in is that I don't really want to be there. Hubbie is the most patient man on the planet and he sees it coming from a mile off. The impatience on the morning before we leave to visit, the increasing stress levels and I am pathalogical by the time we leave the house. He knows it's going to happen so when I say "shall we visit my family this weekend, they haven't seen the boy for a few weeks," he looks at me to see if I'm being serious and then says, "if you like." He knows I don't like and I'm doing it so that my son has a relationship with his wider family. He also bears with my insanity when they come to visit us as I invite all the parents over twice a year. If we didn't host them they would only see each other when a family member gets married.

The highlights of the family visits this year included:

- My father saying he didn't want the gifts I'd bought him before he'd even opened them. (Me saying I'd return any he didn't like was deemed 'rude' apparently)

- Father-in-law widening the conversation from his usual four topics ("why do people insist on having a dinner table in their kitchen ?", his sister & her husband, his medical ailments and Hubbie's weight) to include the Paralympics - he didn't approve of them. I took a large gulp from my mug of tea and went back to watching the TV.
- My own mother telling me I'm a horrible person, I always have been and she should have told me years ago. (For the record she has told me many times over the years and I'm clearly stupid as well or I'd have learned by now not to be such a crashing disappointment and all round rubbish person).

I will explain this personal horror a little further in case you think you misread that. On New Year's Day I called my parents to say "we're on our way" and my Mum launched into a tirade at me because I asked why she had changed the plans we had made for the day. I actually wanted to take my son to watch the New Year parade in London on New Year's Day, but I always visit my parents so I decided that it would be nice for them if they saw him and we'd take him to the parade next year instead.

I was in tears when my son wandered in to the room where I was talking on the phone and said "Mummy sad." As you can imagine I then didn't want to go any more. I mentioned previously that Hubbie is actually a saint and thanks to him being a calm and patient man we did go. I kept myself to myself and as soon as it was polite to leave we came home again. 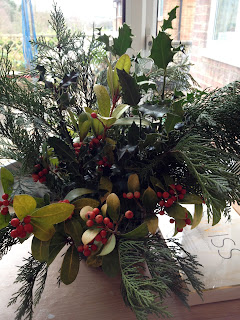 So this is what is going to to happen in December 2013. Me, Hubbie and the boy are going to San Francisco for a Christmas holiday. They boys can go the home of the Giants and I can go skiing at Lake Tahoe. We have friends who live in San Francisco and we've been before so we know we like it there. I'll pop some cards in the post before we leave and tell the family that we won't be doing gifts this year as we're not going to be here. I get to spend the time with the people I love the most and I won't be tempted to make any obligation visits to anyone.

p.s. If you're a blogger who's in San Francisco send me some tips over the next year and help me plan my itinerary please.