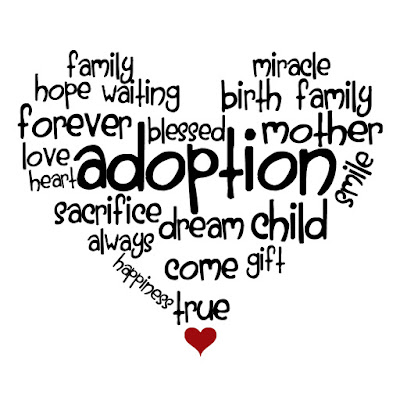 If you've been reading this blog for a while you'll have been on our journey from parents to one son to a family with two boys. I started the blog when Brown Bear was a baby and it's been about the journey we've taken with him and now with his brother.

Last week Hubbie was at an event where he saw a past work colleague who mentioned that he'd noticed a 'new child' in the family. He's seen photos on Facebook and mention of 'the boys' rather than the one and had not wanted to ask too much in case it was all a bit hush hush. Well, our plans to adopt were never a secret, but I didn't want to answer a bajillion questions about him at the start. I still don't really - but now I feel better equipped to offer some answers about adoption rather than Blue Bear specifically.

We have been assessed to adopt twice. Once before we had Brown Bear we were approved to adopt two children. Having been told we could not get pregnant we had decided that we would make an active decision about how to become parents instead of waiting for a miracle. Then that miracle happened and we had Brown Bear.

It was always part of our family plans that we would adopt. I worked with many children's charities where I saw the powerful effect of love within a family and how profoundly it can change the life of a child. Having a child of our own making was wonderful - of course - but I knew that I didn't have to carry and birth a child in order to love and care for him. I also hoped that he would love us regardless of how he came to be in the family.

I say he, not because I only wanted to adopt a boy, but because it was the most likely outcome. Boys spend longer in care, are often considered 'harder to place' and in the case of children of non-white backgrounds are often part of a sibling group, which again means they are likely to wait longer to be adopted, if at all. So the likelihood was always that we would adopt a boy.

So that is how we came to adoption. We discussed it, we agreed and then when it came down to it we made the decision.

Ok I've made it sound easy and it's been far from that. What I want you to know, though, is that all the reasons you can think of for not adopting are far outweighed by the reasons in favour.

It's Adoption Week so I'm writing about adoption every day this week.