On the road - with my boys

As it was the last week of the holidays I decided to take the boys to visit Grandma and Grandpa (mother and father in law) for a few days. The idea was to give Hubbie a bit of child free time to get to work and catch up on his sleep and to enjoy some days out in and around the New Forest where they live. To be honest I was a bit worried about it as I've never been away with them on my own overnight and wasn't sure how it would go. It's also a bit of an unknown quantity how they will behave together and Hubbie's Dad isn't the most tolerant when the boys are in a funny mood and decide to mess around - more of which later.

So I planned ahead and packed the car ready to go including a fully charged tablet for Brown Bear to play Sonic on and a portable DVD player for Blue Bear to watch Paw Patrol on the whole way there. It's been years since I drove to the in-laws on my own (or at all, Hubbie usually does it) so to be sure I put the address into the sat nav and followed Niamh's dulcet tones. The boys were so well behaved on the way and I listened to the radio and they kept themselves amused. We arrived in good time and let ourselves in and unpacked the car. Just as we sat down Grandma and Grandpa arrived home and the boys were delighted to see them. On the first afternoon I left Brown Bear with Grandpa to 'play golf' in the garden while me and Blue Bear went to get some shopping with Grandma. I promised he could see the boats and he loved watching them and spotting seagulls. A trick that has really helped me manage the boys has been to do things with them separately and this worked well while we were away. 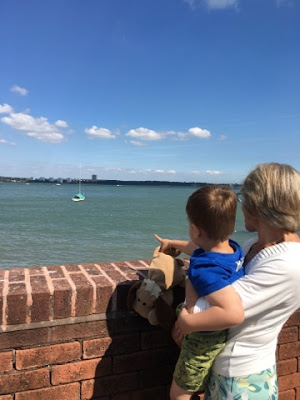 On our first full day we took the boys to the New Forest Wildlife Park - where Hubbie used to work as a teenager - and the separate activities idea was a lifesaver. There are two adventure parks there, one for younger children and the other for older children and adults. Blue Bear had a lovely time meeting all the animals and was excited to see the "ow-els," while Brown Bear insisted they weren't real as he didn't see them moving. Then one of them did (it had clearly heard him and taken umbrage). It's been a revelation this Summer holiday hearing Blue Bear using new words almost every day. Brown Bear has been teaching him to say things and he is so proud when his brother copies him. Often he calls out, "Mum, Mum, he just said biscuit / rabbit / owl / otter," in excitement.


I wanted to make sure that both boys had some one to one time with me every day as I've found that is the best way to stop them from fighting with each other. In fact they have actually started to play together and Brown Bear involves Blue Bear in his imaginative play. We went to a park one afternoon and it was small, but there was enough there for the boys to create a game where they were fire officers with Brown Bear directing where they needed to be and Blue Bear following orders and keeping up with his brother. He was delighted to be part of the role play and kept up with him until I noticed he was turning pink from the heat and encouraged them to get back for a snack and a rest.

One of the things I find difficult is the judgement that I feel is heaped upon my parenting when we are around Grandpa. He adores the children, but isn't a fan of the noise or chaos they tend to bring into his home. When they are tired or just in one of those funny moods where they want to run around the house, or chase each other, or wrestle, or whinge, he is not especially magnanimous about it. I then feel bad and I take it out on the kids. It's a work in progress. 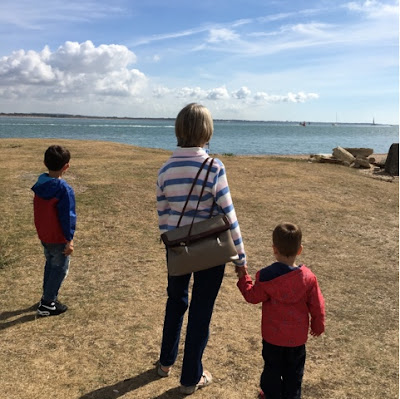 As we prepare for the boys to go back to school and nursery next week I can look back on a summer break that has been exponentially better than the last one. Ok, that's not difficult. Last year was like wading through shark infested custard while being screeched at constantly and loudly. This year hasn't been all Haribo and kitchen discos, but it's shown me that time and a loving attitude towards my boys is paying off.

Last week I was talking to Brown Bear about the things he enjoys doing. He said he didn't really like much (he's going through a miserable phase), but then he surprised me when he said,
"The best day was Blue Bear's adoption day. And the fun day*."
It made my heart sing that his best days involved his brother.

While we were away Blue Bear took a shine to Brown Bear's fire engine trunki. He kept callling it "Mine Nee Naw." Everything and everyone is 'mine' at the moment from grandparents to toys. Brown Bear told me he had said that Blue Bear could have his trunki, "because he loves it." Of course it's possible he would prefer the newer bus trunki that his brother has, but I like to believe that it's a loving gesture from one brother to another.

On the way home from my first 'road trip' with my boys I decided to stop and pay a call on a friend. I watched them run up and throw their arms around her and tell her excitedly about the adventures we had while we were away. Ok, so we didn't really see a zebra or a giraffe (a bit of storytelling from Brown Bear there), but we did have fun. The boys travelled well, they had ice cream every day, they played new games and sat up at the table and practised drawing lifeboats with Grandma.

Now we've done it once I don't feel so worried about travelling with the boys on my own. I  might even consider doing this again in future and making our road trip a regular thing.