On Friday morning a very excited boy will wake up and remind us all that it is his birthday. We have agreed that he can blow out the candles on his birthday cake before he goes to school and he will have waffles with some chocolate spread on them as a special birthday treat. He will get a badge and card in assembly in the afternoon and all the children and teachers will sing to him. After school he will go to swim club and at Beavers this week they will go tree climbing - which he is terribly excited about. While he is at school all day me and Hubbie will build his new desk and set up his bedroom with all the new things we have for him. 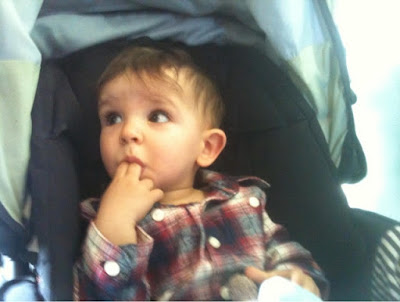 I will spend a lot of the day baffled that my baby is now 6 years old. That since the day he was born there hasn't been a moment when I haven't looked at him in disbelief that he is real. This boy who still puts his fingers in his mouth when he's tired and who has those big brown eyes that give away the mischief that he has in mind.

His first year was just a blur, but I remember our house being filled floor to ceiling with presents for our 3 month old son that first Christmas. His birthday was about the same and as we'd not long moved into this house (9 days after his first birthday) it was a bit chaotic too.

When he was 2 he was apoplectic with us for cutting his racing car cake as he thought it was a toy car. We had a family party for him and he loved all the toy cars he received as well as plenty of gifts from all our lovely family and friends.

On his 3rd birthday we held a birthday party for his nursery friends which involved a dozen kids in our garden and my fantastic friend SJ made mini cupcakes that left all the kids with blue tongues - now that is what I call a party !! I swore blind I've not have a party at home again just on the basis that it seemed a great idea, until everyone was actually here !

At his 4th we decided to surprise him with a sports party and when he arrived and saw all his class there he looked like he would turn on his heel and run away. Thankfully he didn't take off and we enjoyed a fun party with all his new friends. 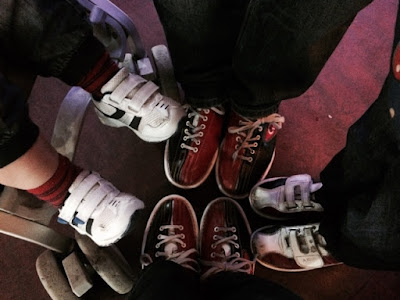 Last year we all went bowling on his birthday. Blue Bear wasn't so sure about what was going on, but Brown Bear was super competitive and got quite cross when he wasn't winning. His big celebration was a pool and pizza party which I'd wanted to do for ages. The kids seemed to enjoy it and who doesn't like pizza ? Not anyone I want to be friends with that's for sure.

This year despite promising we'd keep things simple we've planned a party with street dance and mini Olympics. As he's going to be at school on the actual day we are taking the boys to Legoland at the weekend for the first time and he is beyond excited about it.

I look at my son and can't believe that my baby boy can now do his own tie, he can read, he holds conversations with me. He is thoughful, resourceful and brave. All this week we have been receiving parcels and cards in the post and this afternoon and evening neighbours dropped off presents for him. He's continued to be thoroughly spoiled by everyone and loved beyond my wildest imaginings.

So now you are six son. I'm inordinately proud of you and baffled by how fast the time has flown. Oh and I still think you will be taller than me by the time you're ten !