White is the new black - apparently

So Rachel Dolezal doesn't understand the question, "Are you African American ?" Maybe it's the very fact that someone had to ask her that is baffling. I mean most of us who have darker pigmentation have no choice but to be 'outed' as of an ethnic origin other than white. It's not like I have what Americans call 'plausible deniability' on my side when it comes to ethnicity. It is pretty obvious (visually at least) that I am not white so the only reason someone would ask would be to clarify my exact ethnicity, not to check whether I am white or not.

In case you missed this furore Rachel is an American academic whose ethnicity has become an issue since her parents have publicly announced that she is not a black woman as she has supposedly been claiming to be for many years. In case you wonder why this matters, it may well not. Except that as a civil rights activist she has referred to her own experiences of being treated unfairly because of her race. 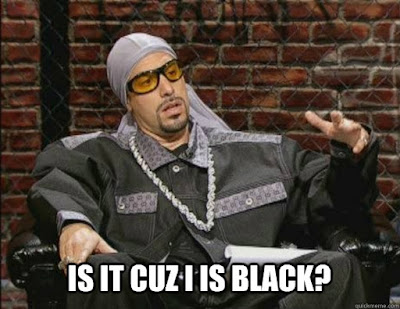 Cultural appropriation is nothing new. Ali G was hilarious precisely for saying, "is it cuz I is black ?" when it was obvious he was anything but. I went to school with a lot of Asian lads who wanted to be black and their faux Jamaican accents were a bit sad, but hardly harmful. Equally I have never understood why people spend so much effort and money on fake tanning to look darker when they have a natural skin colour that means they don't get harassed or hassled for something they can do nothing about.

You see saying you 'feel black' is not enough. It's not all the cliches like enjoying R 'n' B or jerk chicken or even having an embarrassing turn of phrase that sounds a bit black. Is it possible for someone who has been born white to have any concept of how it feels to actually be of another ethnicity ? I have no choice. My skin is this colour and my ethnicity is what it is. I don't get to choose to be white. Mia Farrow suggested it might be possible to be 'transracial' and to be born one ethnicity while identifying with another. I've written before about how I wished and aspired to be blonde and blue eyed when I was a child. It was not an aspiration that could be fulfilled realistically as I have always been and always will be brown skinned so even with bleached hair and contact lenses I'm not able to pass myself off as a white woman.

I have no concept of living a life in which my skin colour is not an issue. I cannot experience any mistreatment by others without wondering if it is due to my ethnicity. Like the man who wound down his car window to spit in my face while I was having a driving lesson. The restaurant in Little Italy that turned us away during our honeymoon when there were more than enough seats inside. Being stopped every time I fly anywhere and having my bags searched. It may well be an over-reaction and it may have nothing to do with my skin colour, but I never know for sure.

What I do know is that my parents have been treated with racism - of the old fashioned open and hostile variety - for many years. My father worked in an office with a woman who would hold her nose and make childish remarks about how the smell of curry was really strong when he was nearby. My mum was overlooked for promotion repeatedly at work in favour of younger white colleagues who she would then have to support to deliver the job they were not qualified to do. My sister lived in a town where people would shout racist taunts at her in the street for no reason other than they could.

So, while you may well identify with black people it doesn't mean you can pass yourself off as black. Rachel cannot claim to have an authentic experience of what it is to be black in America. She will never know what it is like to commit the crime 'guilty of being black.' It is terribly flattering that you want to be black Rachel. It's ever so good of you to try so hard to identify with a group that has suffered so much. It is also, however, deeply crass to pretend to be something you never will be. To be photographed with a black man and say that he is your father. To claim to have been a victim of racism. To deny your own privilege and wear blackness like clothing.

It's not flattering Rachel. It's shameful, inauthentic, offensive.

I'll let Maya Angelou - who knew plenty about the reality of being a black woman and civil rights activist - have the last word.