The cat, my boy and the missing teddy bear mystery.

My chosen reading at the moment is a book called, "New Toddler Taming" that was lent to me by a friend of mine who has two boys. It has been a difficult time with our threenager and he's been pushing mine and Hubbie's patience to the very limit. It has made us both feel so tired and sad and disappointed. It feels like we just have no clue how to deal with this seething mass of shouting, kicking, screaming energy and it's demoralising.

Then I look at him right now lying on his front drawing a picture of Big Ben wearing clothes he chose and put on himself - yes they do match. He comes over to show me he's also drawn a picture, "Of me and Daddy and Mummy and my sister Clovey." Then he draws another small face, "That's my baby brother." Our boy is an only child, so maybe it's more aspirational than factual. He knows that we would love for him to have a sibling so it's reassuring to know that he's keen on the idea of being an older brother.

I often reflect on the early days when he was so new and shiny and it was exciting being exhausted, overwhelmed new parents. When he was so tiny he'd lie between us in the bed and I'd hold my breath so I would be able to hear the snuffles that confirmed he was breathing and alive. Carrying my baby son in a sling and being able to kiss the top of his head while strap hanging on a bus or walking to an appointment for a check up with the doctor. Being so scared of every little thing that might go wrong and realising that this would be the emotion I'd feel the rest of my life.

In order to keep a sense of perspective I try and reflect on the positive things that bring a smile to my face. The things that remind me how proud I am of my boy and how blessed I feel that he is in my life.

So, as we go into another weekend I am armed with tips and hints from the book and a heart full of hope that this one will be better than the last one was.

I find it's a good life rule to give the last word to Calvin and Hobbes. 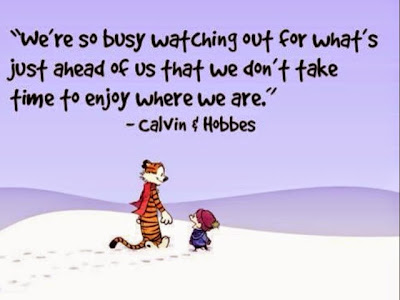