Flash, bang, wallop what a picture…

We've been talking about booking a holiday for a while now. Well, since before it turned hot and sunny here and didn't feel like living in Narnia that is. We have so many destinations in mind with friends in France, Greece, Cyprus, Turkey and California and family in India, Australia and New York.  The main sticking point was that we don't have a passport for the boy and I am so incredibly worried about travelling with a toddler who refuses to listen or sit still for any length of time. My passport is still in my maiden name as I had it renewed the year before we were married and I was loathe to pay for a new one just to use my married name.

So both me and the boy need passports. Today we popped in to see my lovely friend Lucy - who works for a photographer's studio - to get our passport photos done. If that seems a bit extravagant let me explain why we decided to call in the professionals. I have taken many, many photos of my boy since he was born. He was always pretty happy to oblige with a cheesy grin and a look straight to camera or iphone or ipad or camcorder, etc.  Then something changed.

If I ask him to look at me for a photo now he does this: 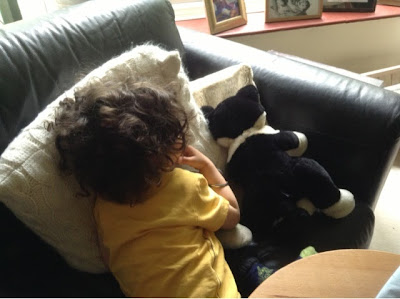 So the photos we have of him are wholly unsuitable to be used for a passport.

Like this one where he has his hair over his eyes and his fingers in his mouth. All no-nos for a passport photo apparently: 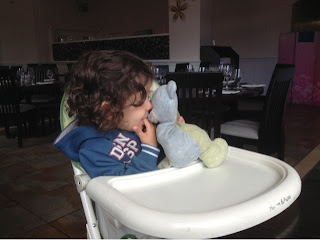 Can you spot why this one would not be suitable ? Yep it's the hat and sunglasses and the fact that he has his mouth open: 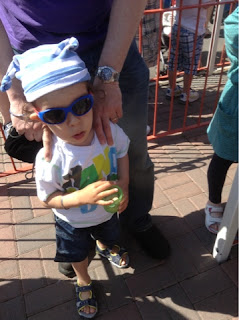 So to get him to sit for his photo I had mine done first - and yes it does look like a mug shot - and I did have to have some photos taken with Jiggles bear on my head in order for him to agree to have his done. Only then he kept:
Finally we got a photo that may just pass - and yes it does look like a mug shot. Then he spotted an open door to an office (big mistake !) so he went off to:
When I tried to get him to come home he told me to go and "leave me to do some work Mummy." 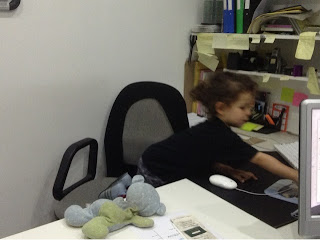 Then when I finally got him home I popped in to check why he was taking so long on the loo. He decided to impersonate an Andrex puppy and had unravelled the entire loo roll onto the floor.

I'm exhausted just from getting the photos done - not sure I can cope with taking him on holiday just yet !