My first ever giveway: It's celebration time woo hoo !!

I may have mentioned the massive goodie bag that I got from attending Britmums live last month. It was brimming with lovely stuff and took me a few days to fully comprehend what I had in it. One of the items I hadn't really spotted at first was an iphone cover by Speck that was super light, looked pretty robust and had a textured back. As my iphone has fallen victim to the old cracked back syndrome that so many iphones before it have befallen I was quite keen to try this and see if it would offer better protection than the ones I'd tried before.  The freebie cover is for an iphone 5 - which I don't have yet - so I asked nicely if I could have one for the iphone 4s. In super fast time I received a bright pink phone cover and a vibrant green cover for an ipad mini to use and review.

Firstly the phone case which is a perfect fit and leaves a really discreet outline of colour around the outside of the phone and full coverage of the back while still allowing you to use all the buttons on the side and to access the headphone point without obscuring the lens of the camera at the back. It is very lightweight and seems to be pretty shockproof so if - like me - you are prone to dropping your iphone a lot it will withstand some bashing. I was very surprised at how much I like this cover as it isn't all that exciting to look at, but once you have it on your phone it comes into its own. I previously had a silicone type cover that just went round the edge and then I bought a plastic photo image cover that was very nice to look at, but cracked at the slightest drop. This is far sturdier and I'm not worried about it going discoloured or shattering.

The other product I was sent was a fitfolio case for the ipad mini. When I got my ipad I carried it around in bubble wrap for the first few days so keen was I to ensure it came to no harm. Then I got a cover that was mock leather with a magnetic closure and was delighted as it provided maximum coverage. The main let down was it was about the same weight as the ipad itself and it was also bulky.

This case, however, is in two parts with a plastic shell or cradle that clips onto the ipad and the soft(ish) cover that folds back into a stand and acts as a cover when not being used. The clip on is snug and holds it in place and ensures you don't get any of the slippage that I had with my old cover that led to some photos featuring a cloudy bit where the lens got covered accidentally. No such issue with the Speck cover as it's secure and fixed but also thin and lightweight so it takes up little space in my bag. The only downside I have found is that when the cover is closed it does sometimes trigger an app to open so I just open it again and shut it down. It's a very minor quibble though.

I have to admit that when these items arrived I wasn't sure about them. They're in bright candy colours which I found a bit loud at first, but to be honest I like them now I've used them for a while. The products have been designed with use in mind so they are practical and sturdy to use as well as being light and cheery looking. The iphone case I was sent is the pixelskin HD and retails for $29.95 online. The ipad mini case is the FitFolio for ipad and is priced at $34.95.

Now the good bit - I have two of these lovely products to give away !! 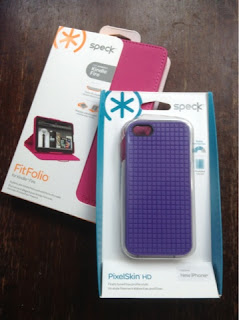 I've never done a giveaway before and as it's now been 2 years since I started blogging I thought it was high time I gave some prizes away with the help of the lovely Lindsay Anne at Speck in California. (I will be calling in on our next trip to San Francisco - you have been warned !)

So here's the deal: I have an iphone 5 cover in purple and a cover for a Kindle Fire in hot pink. You can win one of these of your choice.

To enter simply tell me a funny story about technology and your family (parents, pets, kids, etc.) Also please tell me which item you'd like to win.

As it's the school holidays I will pick two winners at the end of August*  - Good luck !! .

Disclosure: I was sent these products to write an honest review. All views, words and photos are my own.


*sorry postage within the UK only