I took a few days off. Not just time off from work or to cover half term. Actual time off. A proper break.

My gorgeous friends Natasha and Luke invited me to visit them in New York and despite my natural inclination to say 'oh no it's too difficult' they weren't taking no for an answer. So I made plans. I asked my mother in law if she could have the boys, she said yes. The biggest worry sorted out. I hadn't asked for time off work and with all my colleagues off over half term it was looking highly unlikely I would get annual leave approved. Only it was and that was the other big obstacle removed. Then I had to apply for an ESTA (no I didn't know what it was either !) and find my passport - that was a day or so of minor panic - and finally I went ahead and bought travel insurance.


Two days before I was due to fly I borrowed luggage from friends and as late as the night before I still didn't quite believe it was really going to happen. Of course part of that was due to the weather - with storm warnings flights were being grounded and it wasn't clear if I would be able to go or not. Still I had to pack and check in online. I made sure the car was packed, the CD players fitted to the seat backs  and the boys had enough clothes, boots and layers for their stay.

For a week I made plans and contacted people and put things in place so that I could go away for 4 days. The night before my flight I was crying out of guilt for leaving my boys behind and for being so selfish. As I sobbed, "I'm sorry for leaving you baby," Brown Bear put his hand on my arm and said, "Mum, you deserve this." How did he get to be so wise ? 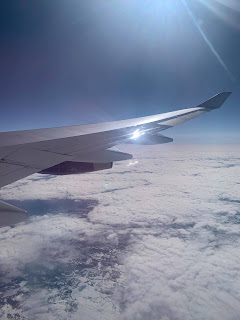 Long story short I got on the plane after a 2 hour delay. The anxiety had built up so much I was in floods of tears as I boarded. Between sobs I apologised for being so silly. I was directed to Tracey who handed me a glass of champagne and sat me by her instead of in my seat while they boarded everyone. She reassured me and when we got the JFK 6 and a bit hours later she handed me a bottle of champagne to share with my friends. I love Tracey.

Natasha met me at JFK and for the next few days I didn't have a thing to worry about. I went running in Central Park in the sunshine, ate brunch at Tom's Restaurant (the place you see the outside of in Seinfeld) and took in the incredible sights of New York from the One World Observatory. We bought cupcakes at the Magnolia Bakery (from Sex in the City) and I ate the best gnocchi of my life. I went to visit my friends Gwen and Russ in New Jersey and snuggled their baby girl and hugged their kids and laughed out loud at inappropriate jokes that only people who've lived in the UK will appreciate. 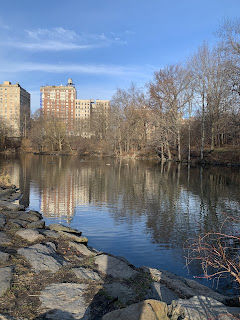 I messaged my kids most days - due to the jet lag I was up very early - and they seemed to be absolutely fine. There was one logistical hiccup that I had to resolve, but free of the other dramas that I have to contend with it was relatively quick to fix.

So this was the thing I hadn't appreciated that pretty much everyone else could see. I needed this. I had to take a break from all the day to day stuff and to just do something for me. And doing that didn't make me selfish, or a bad mother, or any of the other things that I have felt  like for so long.

On any given day I have to make 1001 decisions (give or take). For me, for my kids, at work, at home. The mental load of parenting alone and of working full time and of being all things to everyone takes a lot out of you. It's exhausting.

I cannot tell you how much difference it has made having that few days away on my own. Doing things that I love to do, with wonderful people and no pressure. It feels like I can actually breathe again. As if I can take a step back from the things that are going on. 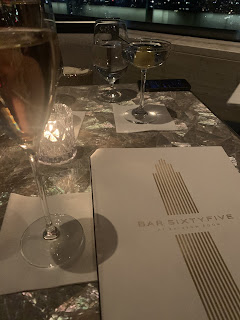 Since I got back I feel optimistic. I believe things are getting better. That I deserve a bright future. It is within my reach.

It has made me feel so lucky to have people care so much that they could see I was in pain and they wanted to do something to help me.

It didn't take a miracle, but it feels miraculous to me right now.