Watching Strictly with my boy is fab-u-lous darling

Brown Bear has been singing a particular song recently - it's not one I know, but the constancy with which I've heard it has lodged it in my mind. Last weekend Hubbie said that one of the dances on Strictly had featured Brown Bear's song. I showed him the dance tonight and he loved it. Then he enjoyed watching the comments afterwards and before we knew it we'd watched all of last week's show. He enjoyed the scoring - he's a big fan of numbers - and particularly liked predicting what scores the judges would award.


Once we'd seen the 'D'Esposito dance' I asked him if he would come with me if I won tickets to watch the show live. He thought about it and replied, "Only if they do this song again. " It's probably just as well that it's unlikely I'll win any tickets.

Susan Calman appeared and he asked me why she was called Susie on the show and I explained that the song title was about Susie. Then he said,
"I know her - she's on Top Class."  When the shot panned across the audience I pointed out Susan's wife. Hubbie walked past and I said, she looks different from when we saw her.
"Did you see her in real life Mummy ?"
"Yes sweetie, she did a show in Croydon."
He looked pretty impressed.


When we saw Jonnie Peacock dancing I said Oti (Jonnie's partner) is Daddy's favourite dancer. Brown Bear asked about the blade Jonnie was wearing and I said,
"It's like the one that Jim wears at the swimming pool isn't it ?"
"No mummy his is different, this one is bigger and looks like a blade."
"Yes that's true, but they are both artificial legs or 'prosthetics'"
"He's dancing very fast."
"He's a runner and was in the paralympics. We took you to watch some of the events at the paralympics when you were a baby." 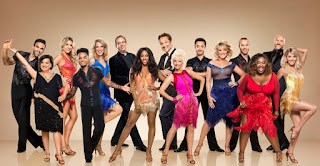 As I mentioned we watched more dances than I had intended and he was really getting into the show.
"Mummy are they married to each other ?"
He asked about each couple.
"No, they're just dance partners. Bruno and has a boyfriend and Craig does too. They're not married to each other."
"What language is Bruno speaking Mummy ?"
"He is speaking english, but it sounds different and when he gets excited he sounds even more italian." 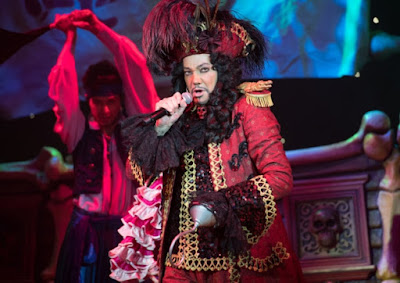 Brown Bear was keen to skip straight to the scores, but I like hearing what the judges think of the dances. "Why is Craig horrible to everyone ?"
"Well he takes it seriously so he tells them when they get it wrong. He's being honest."
"He's not nice to them."
"When he likes the dance he does tell them, but he also offers some advice on what they can do better."
"I've seen Craig before."
"Yes we saw him in Peter Pan last year - he played Captain Hook."
"Oh did we ?"
"Yes, you met him after the show. You had your hook on your hand and he said how cute it looked."

So a new strictly fan has been created. He already asked me if he can watch the next one and as Hubbie is out tomorrow evening I've promised he can watch the results show with me. I might even wear sequins.