Oh I do like to be beside the seaside

After our child-free weekend in Brighton over the August Bank Holiday I thought it would be nice to take the boy to the seaside and relive some of my childhood trips there. As it looked so sunny yesterday morning I decided that was the day and announced to Hubbie that I was packing a lunch for us to eat on the beach. We all piled into the car and got on the road for out fun day out which turned out to be a typical English family day out by the sea. 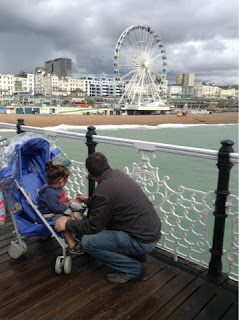 1. Queuing: for Volks electric train which has been there since I was a child. The boy loved it and enjoyed the journey to the marina, but was far more interested in the snacks I had in my bag. Oh well.

2. Indian for lunch: Having left the picnic in the boot of the car on Madeira Drive we decided to have lunch at the Marina while it rained outside. Hubbie spotted a restaurant serving a buffet of indian food and that sounded just right - not least as the boy was free. How much more traditional can you get than indian food by the sea ? No ? Just me then.

3. Wet and windswept on the pier: It's not possible to visit the pier in Brighton and stay dry in my experience. On this occasion the heavens opened just as we got to the pier so my poor boy in his shorts and superman shirt was promptly tucked under his plastic buggy cover which went steamy and he was very unimpressed until we went into the arcade to dry off. 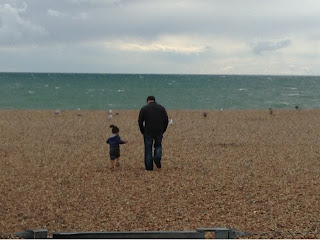 4. Picking a pebble from the beach: It wouldn't be a day at the beach without bringing home a pebble so the boys went searching and came back with a few - and a special speckled one for Mummy.

5. An ice cream with a flake in it: for the boys of course and a cup of tea for Mummy. I don't do ice cream really, but if you go to the seaside you have to have an ice cream don't you ? I'm sure there is a law about this.

He had a lot of fun on his first trip to Brighton.

Next time we'll pack a bucket and spade and book some sunshine.