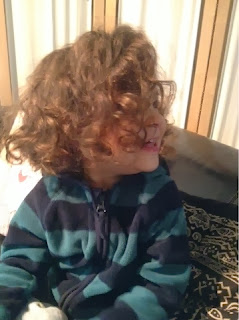 Today was a rite of passage for our boy. He had his first haircut. I have been distraught for weeks since we decided to do it. We have grown his hair since he was born and it is gorgeous and curly and he gets compliments everywhere he goes. However, the nightly chore of combing through his luscious locks has become increasingly difficult as the knots and tangles cause him to scream and shout so much I am convinced the neighbours will report us to social services.

The reason we haven't cut his hair before is because my family are Sikh and keeping hair long is one of the articles of faith. Hubbie is not a Sikh, but we agreed that we would grow his hair and as much as possible raise him with an understanding of this part of his heritage. That made the decision even harder. I didn't cut my hair until the age of 26 (long after I left Uni) as I just believed it would be wrong and my parents would be disappointed if I did. I felt the same about cutting my boy's hair.

It is our decision as his parents though so I've been talking to him about it for weeks and he has been looking forward to it. His hair was so long he was having to constantly push it out of his eyes and at nursery I took to tying it back so that it wouldn't annoy him or get smothered in paint or playdoh. When Hubbie went to the barbers earlier in the week he took the boy with him - they were talking about the big day and the boy said, "when I get my hair cut short I won't have to wear a hairband any more." Can't say fairer than that can you ?

So today we all took the train to town to get his hair cut with my hairdresser - Anderson - who I love and trust. He was absolutely delighted when I asked him to do it as he knows how big a deal it is. We arrived and the boy got to play with a water spritzer - which he could have done all day - then the gown was put on. Anderson suggested I sit the boy on my lap and wanted me to do the first cut. It was very emotional. 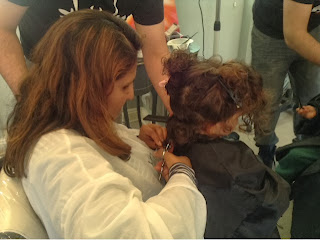 Then the boy got into the swing of things and as he watched the beautiful curls being gathered up by me to give to Grandma and Nani-mummy and others fell on the floor he chided me and Hubbie to leave his hair. It would seem he is not as emotionally attached to it as we are - just as well really. 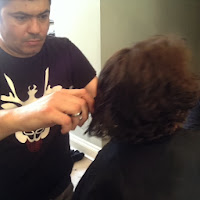 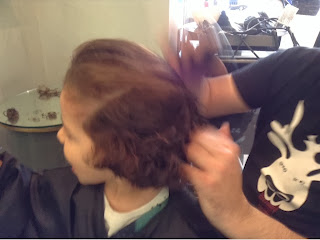 Now he has shorter hair. It doesn't take as long to run a comb through. He looks a lot more grown up.

He is still very cute - just don't tell him I said so - it's not good for his image.