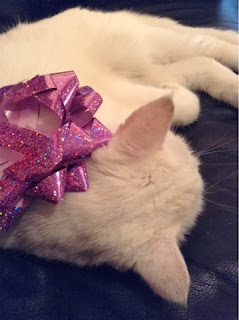 Twelve toddlers, a gazebo that kept threatening to overturn in the wind and so much noise that the cat hid upstairs on his beanbag all afternoon. He only emerged after everyone had left to ask for his dinner. The main thing, though, is that we all made it out alive. No toddlers were harmed, the food was eaten and the drinks consumed. Every child found some treasure in the 'woods' at the end of the garden and they all got a goodie bag to take home as all the contents arrived in time. Then today our boy's birthday card was shown on Cbeebies after three years of trying. I'm expecting a damehood at the very least for awesome Mumming !

Seriously though I was so proud of my boy on Sunday. As each of his friends arrived he spotted them, came over and greeted them with a cheery, "Hello, thank you for my present, come and play" and took them over to the garden area where we'd set out games and playground toys for them all. At points Hubbie spotted the boy having intense conversations with his nursery pals in a mini version of the adult scenario at the other end of the garden. As all his pals left he handed them a goody bag, thanked them for coming and as his head started to droop on Hubbie's shoulder we could see he was as worn out as we were. My little party animal.

On how far we have come. 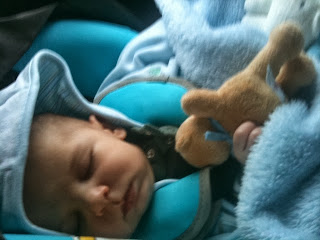 My boy is three today. At one point we weren't sure we'd ever have a child of our own. Then we weren't sure we'd ever get to adopt a family of our own. Then this miracle happened and we found out we were having a baby. Then we had a scan and found out we were having a boy. Then we were so close to meeting him and then worried that after all of it we weren't going to. Finally at 2.20pm on the 30th of September 2010 (a full two weeks late) our boy finally arrived and my heart skipped a beat.

There is a saying that when a baby is born a mother is also born (and a father of course). When I watch my boy putting his own pyjamas on, taking off his trainers by himself and giving all the family double kisses 'continental style' I see how far he has come since he was born. I'm also now - as we emerge from the fog of early parenting - starting to see how far I have come too.


Happy Birthday to my darling boy.

No shoes compare with the joy of being your Mum. Well, maybe...