Review: Paw Patrol and Blaze and the Monster Machines DVDs out today.

With two boys aged 5 and 2 years it's not often I can find something that will entertain them both. One likes Lego and the other one just likes to throw it. One is keen on pushing cars around the house and the other one likes to draw them instead. When it comes to TV one likes watching teen shows and the other one prefers cartoons so it's great if I can find shows that they will both enjoy and that keep them busy while I do basic things like prepare food for them.

I first discovered Paw Patrol when Big Boy started to say, "Ryder Sir" and I had to ask what he was talking about. He explained that the pus all had important jobs in fire safety, rescuing others and generally being helpful. Of course Marshall is his favourite as he is still fascinated by fire officers. They both love watching the episodes together and with Baby Boy's new interest in all things pirate the new DVD Paw Patrol: Pups and the Pirate Treasure is right up his street. The DVD features 6 brand new episodes with the gang stumbling onto a secret cavern that was once a pirate’s hideout where they discover an incomplete treasure map. The adventure is on as the pups follow clues to find the missing map pieces, and eventually to a sunken pirate treasure! 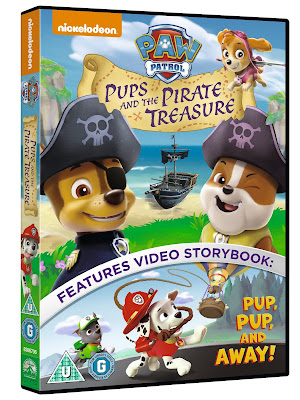 
The other show they both watch is Blaze and the Monster Machines and the new mini movie Blaze and the Monster Machines: Blaze of Glory sees the truck and his best pal AJ in a new adventure. Blaze is Axle City’s greatest hero, and champion of the racetrack! Whenever there’s trouble, he is the truck everyone turns to for help as he can do things no other truck can! With his special turbo powers and extraordinary knowledge Blaze is the fastest monster machine in town. Blaze knows everything about science, technology, engineering and maths. With his human driver and best pal AJ, when Starla the cowgirl truck loses a piston, the duo need your help to use force and speed to get to it before Crusher gets his greedy tires on it! This pre-school interactive adventure returns as you at home must help Blaze on his quest, by exploring the physics of how things move, tackling problems and discovering the component parts needed to make every day technologies work. Join Blaze and AJ as they Blaze into glory in the Monster Dome’s Championship Race, and learn some fun facts along the way. 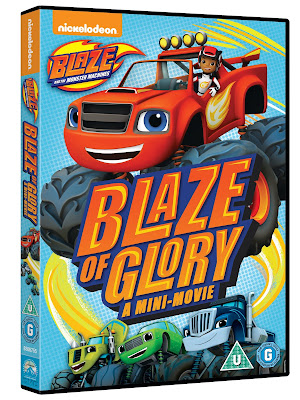 
My boys loved both of these DVDs and they have special features that make them an ideal gift for the Easter holidays. Not least if - like us - have long road trips so a DVD that keeps the kids amused is an essential. Both titles are out today so there's plenty of time to get them delivered for Easter.

Disclosure: We were sent review copies of both DVDs.