I'll be honest, I'm just not a very good Mummy.

I have failed my boy - I'm not fit to call myself his parent. Someone will soon be sending me this notice in the post from the Parenting Police headquarters.

On Friday after his swimming lesson one of the other mums came up to me to say he was splashing around and taking up a lot of the attention from the teacher and as a result the others were missing out. Apparently because I'm swimming in the adult pool she thinks I haven't seen him even though I look over every 3-4 minutes and every time I hear his name called (which is frequently). He loves swimming and he loves to splash around in the water. Some children don't love this and he is only 3 so he doesn't appreciate that his idea of fun is not theirs. I've spoken to him about it before, but he is 3 so I may well have to say it quite a few more times before it sinks in.

The problem is that after she'd had this dig at me for not sitting on the side watching him swim - like all the other mums do - I was upset at what she'd said. It made me resentful. So when we got in the car instead of being reasonable I took it out on my son. This was unfair as I don't think he's done anything wrong and the teacher hadn't said he was being disruptive either when I asked her. I was cross with the woman who told me off and as a result I told off my son. We had a row. There were tears. It was horrible.

So I feel I've failed because surely in the rules of how to be a parent one of the first ones is that you are on your child's side ? If I'm not on his side and defending him then who is ? It's my job to defend him and to speak up for him and to show that I believe in him. I'm not saying that if he hits or spits or steals I'm going to give him praise and defend his actions. I mean when he's done something that I don't think is wrong I should defend him shouldn't I ? If I don't then whose side am I on ?

I'm the oldest child of four and when I was young my parents were quite strict. When I fell over they would tell me off for not being careful or for not looking after my bike - it did cost money after all. I had a bloody knee from falling over in the park once, as I limped home I was told off because my socks were ruined. When my younger siblings fell over or got hurt in my care I was accused of trying to kill them - I am not joking this really happened. The result is that I never felt that they were on my side.

The other day my son fell off a chair at my parents house. I checked to make sure he wasn't hurt and told him that he should be more careful. My parents looked at me with what I can only call ironic concern - they thought I was being too hard on him. I was. Did I mention he's only 3 ? What is wrong with me ? 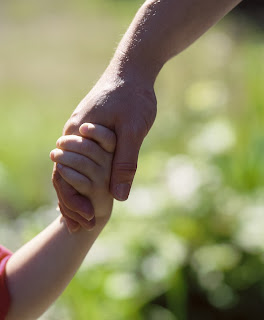 I'm grateful to my parents for a lot of things. They taught me a lot of important values and they raised me. They are wonderful grandparents and love my son. They are on his side as much as they weren't on mine. Maybe that's why I feel like such a traitor for not being kinder to him when things happen. I know how it feels if you make a mistake and your parents are the first ones to point out how stupid you are. That's why I'm so hard on myself first - I'd rather not hear how I've let them down and how disappointed they are. So why do I hear their words coming out of my mouth to my beloved son ?

I don't want my son to grow up thinking I am not on his side. I want him to know that I will defend him and stand up for him. When he's a grown man I want him to know I've always been proud of him. I will cheer his achievements and when things aren't going his way I'll be there to support and care for him or just to listen.

So why is this simple thing so difficult for me to get right ?