Inter-generational japes and trips to Ikea 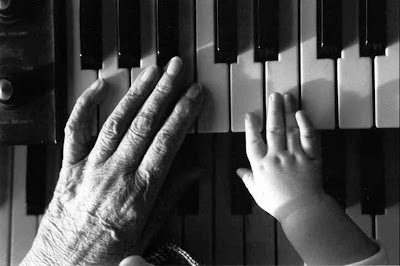 A programme last night has sparked animated conversations about the mutual benefits of older people and small children spending time together. In the TV documentary nursery children visited people in a care home. It's a social model that has been adopted in other countries where in some places nurseries have been located inside nursing homes so that the older residents spend time with the children every day. The thing about this that fascinates me is why anyone should be surprised by the outcomes of such an experiment.

I've had conversations recently with a number of people who are caring for elderly relatives / parents. The overriding issue they worry about is leaving an older person alone for fear they might fall or the cost of the care they need. The question I always ask is, "Is s/he happy ?" Older people experience all the emotions they always have, but for some reason they are treated as errant children for being angry or upset or for not wanting to 'join in.' You see loneliness is the one thing we feel so uncomfortable both talking about and dealing with. Equally when I suggested that my friend's parent might be feeling depressed (in as kind a way as possible I'm not a monster) I hoped it was helpful rather than another thing to feel guilty about not knowing. It's difficult to see our own parents changed or weakened by age. Taking responsibility for their happiness is even scarier.

When we first moved into this house Brown Bear was one year old and our retired neighbours P and J loved seeing him and watching him grow. They would invite us to play in their garden and enjoyed his company and P often commented with great surprise at the new developments in my boy's language or abilites. As P's cancer progressed and he spent more time in hospital we saw less of him, but he still looked forward to seeing Brown Bear and J would pass on that he'd raised a smile when he heard our boy chattering away. My greatest worry when P passed away was that J would be lonely. As it happened all of her friends and family rallied round and kept her busy with holidays, invitations to dinner and weekends away. This is still the case 5 years later.

We have a wonderful relationship with J and she is a self-styled, 'spare granny' to the boys and they fight over who will go to her house for a 'playdate.' Blue Bear goes in, takes off his shoes and plonks himself down on her armchair - he loves keeping her company. Brown Bear will usually take something to do, either a game or a book so he can read to her. For a time I worried that this was too much to ask of her, but then I noticed that she really enjoyed being with the boys. Some days we invite her to join us for a visit to the park or for lunch or even just a trip to Ikea. One thing I did notice was she wasn't hearing so well and she joked with me about it. I decided to mention it quietly to her daughter-in-law as I was getting worried and didn't want to cause concern, but thought it best they knew.

The thing about intergenerational socialising is how unforced it is. I have seen how the most curmudgeonly of old men (thinking of no ones father-in-law in particular *cough*) answer a toy phone when handed it by a small child. My boys regularly charm older people as they help me with the shopping and I will strike up a conversation with someone because they are talking to the boys. To be honest my friend's idea of opening up nurseries so that women can go in and hold babies to reduce stress starts to sound really sensible. That is if it wasn't so unethical and, you know, mad. Don't challenge me on why only women, it's not my idea I'm just sharing.

Being around young children has given a boost to my parents and in-laws. As grandparents they have found a joy in being around these small noisy people who demand and bicker and fight and generally bring disorder into their lives. I've seen my father play football in the garden with this 3 grandsons when he's usually stuck to his armchair pretty much all day. I've watched my father-in-law sit and patiently build a toy aeroplane because of the plaintive cry of, "help me Grandpa," from Brown Bear. The boys go and visit their grandparents and stay over without us which is something I never did as my grandmother was in India so I saw her rarely. I was very close to her though and loved her company when I did visit. Hubbie stayed with his grandparents when he was a child so he was very close to them and I'm so glad our boys get to do the same.

My boys have a great relationship and respect for people borne of their contact with family and friends who are older. I hope this stays with them as they grow up.