I miss the velvet seats most of all.

I took Brown Bear to the cinema last week for the first time in ages. We were invited to see Captain Underpants by a friend who gets tickets to preview screenings and I wasn't able to go so he went with Hubbie and Blue Bear. So with the holidays well underway I thought I'd take him out - just us - as a special treat. We went to see Despicable Me 3 and he had popcorn and a soft drink I don't let him have often and we went for pizza afterwards. It was a lovely thing to do and I hope we get to do it again soon. 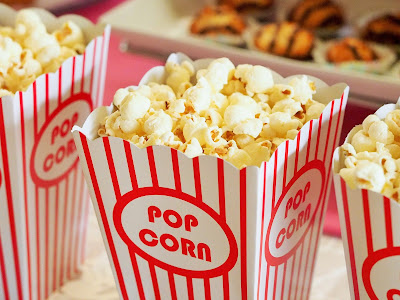 I used to go the cinema very regularly and now it's such a rarity that I only get to see recent films if they are on Sky movies and I get to watch them when we visit the in-laws. You see films have always been a big deal for me. The other night Dirty Dancing was on and I was telling Hubbie how I'd been to watch it when it first came out - I was 16 - and I was obsessed with it. I convinced myself I wanted to be a dancer. Just like I decided after watching Desperately Seeking Susan that I would wear those ridiculous bangles and ribbons in my hair and shop in second hand shops. I spent a lot of time in Flip on Long Acre in Covent Garden after watching that film and even spent time in Camden while also thinking, "this is a ridiculous place full of tourists why is it so popular ?"

Whenever a film comes on TV I will tell Hubbie the story that comes with it. More often that not he's not seen it anyway, but I like to add a bit of a personal touch to enhance the experience. Here are a few of my favourites:

Back to the future - Me and my brother went to watch this in the eighties and were probably wearing bodywarmers (before the were renamed gilets) which Mum had bought us in Southall market. The lads sitting behind us were talking and at a crucial point in the plot one lad - who had clearly seen it already - told the other one, "It's ok he's wearing a bullet proof vest." Suspense ruined.

Toy Story - I went to see this with all my siblings. My sisters sat behind us and I sat next to my brother. At the bit when Buzz finds out he's a toy and not a real astronaut I heard my brother quietly say, "Oh no," with genuine sadness. He was 21 !

Star Trek into Darkness - This was one of the few films I've seen with Hubbie. We upgraded to the posh seats as a treat and settled in for the cinematic experience and it was fantastic. At one point Benedict Cumberbatch's character has been captured and he's asked his name. The dramatic music lifts and he booms, "I am Khan." and at that moment someone in the audience exclaimed, "Oh Fuck !" Everyone collapsed with laughter.

Sliding Doors - I watched this with my long term cinema buddie Sandra and I had been looking forward to it for ages. We went to a daytime screening and two older ladies were sitting in front of us. They seemed to be enjoying it until one of them said, "she looks like her sister or something." and it became evident that they had no idea that it was two separate strands of the same story. We decided not to interfere to correct them.

Broken Arrow - when I used to work away from home sometimes I'd have a quiet afternoon so I went to watch this film in chinatown in Birmingham. About twenty minutes after the designated start time nothing was happening so I went to ask what happened and the manager admitted that he hadn't realised anyone was in the cinema so the projectionist hadn't put it on. I sheepishly went back to my seat to watch John Travolta smoke and over-act like a good 'un.

Titanic - I went to watch this in the much-missed ABC cinema in Streatham. It was a lovely old art deco building and the screens were old and the seats a bit tatty, but it had its own charms. During the film I noticed the screen seemed to be juddering, but no one else was bothered by it. After an hour of this I had a bit of a headache so I went to ask the manager to check if I was imagining it. He looked at the screen and said, "Oh that's not right is it ?" and went to fix it. I don't know if anyone else noticed.

Boxing Helena - I am taking a guess at the film because it was truly terrible, but I did go and see it. I was in a cinema in central London during the day and decided to sit to the left side out of the way so I could spread out and enjoy my snacks in peace. Then a woman and her daughter walked in looked around at the completely unoccupied seats and decided to sit right in front of me. In an empty cinema.

Vantage Point - Me and Hubbie decided to go to the cinema when we were in India. We went to a shopping mall in Delhi, my grandmother went to a coffee shop to watch the cricket - yes I being serious - and we went to watch a film. We paid to upgrade our seats and were offered a menu as we sat down. The waitress served me tea on a tray in our seats and offered a list of snacks. It was a bit odd but so very indian. I loved it.

Oh I miss the old days of visiting fleapit cinemas - actually no not really. I do miss going to the cinema though. I should do it more often.