You know how at the weekend some meals are just a put together thing and you don't want to try too hard ? It's usually before or after a Sunday roast for us so it balances out the massive meal with all the trimmings. We either have a leftovers sandwich for dinner or a simple soup lunch if it's roast for dinner.

This weekend, however, I made an indian meal for all of us with masses of food and as usual there was plenty left over. As we're celebrating National Crisp Sarnie Week (yes it's a real thing) I decided to go for a slightly different take on a sarnie. You see Seabrook crisps kindly sent us some of their delicious crinkly crisps to make a sarnie with and they are based in Bradford. As this city has seen such a lot of asian cuisine over the decades I thought I'd celebrate this with my Bollywood take on the  humble crisp sarnie.

We had a delicious veggie curry made of paneer (soft cheese) and mixed vegetables in the fridge. I made this myself and it's not difficult - give it a go with my paneer vegetable curry recipe. Of course that's a lot of effort for a sandwich, but that's what makes it so special, well that and the addition of delicious and decadent crisps. If you want to make your own here is how: 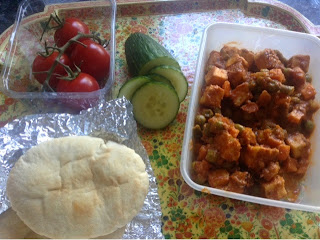 So firstly heat up a small portion of the curry and pop the mini pitta(s) in the toaster to warm up. This will also help open up the pittas to make filling them easier. While this is going on slice the cucumber and open the crisps - at this stage you can test some of the crisps to make sure they are suitable. Mine were lovely. 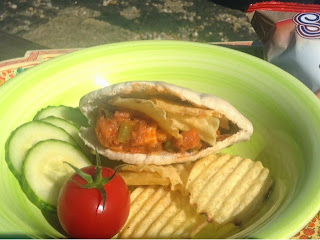 When the pittas are done carefully cut open along one side and fill with as much curry as you like then with plenty of crisps for added crunch - the quantity depends on your taste.  I added a small salad of cucumber and tomato to the side rather than into the pitta so that it wouldn't go soggy. There were also some crisps left (amazingly !) so they made a nice side garnish too. 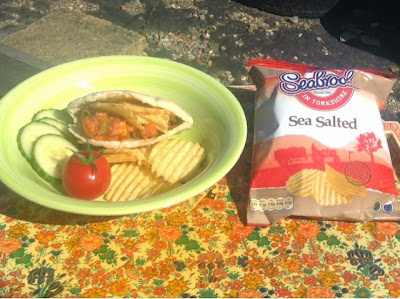 Ok, it's not a conventional sandwich, but it's my portable version of an indian takeaway. The addition of Seabrook crisps is a modern take on poppadoms and if you like a tasty and filling sarnie this one will definitely fit the bill.

Bollywood music and dancing is optional :)