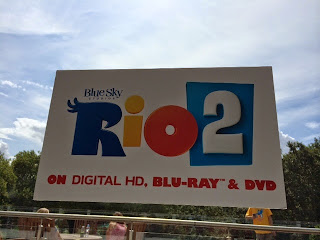 On Monday we were up and out early to get into London for a very special trip. I took my boy to the launch of the DVD and blu-ray of Rio 2 which was being held at London Zoo. We got an early train then took the scenic C2 bus which gave us some stunning views of London from the top deck. As we were walking to the event I thought I saw Bill Oddie driving past us and sure enough when we arrived he was there ! A real life Goodie in the same room as me !

We arrived in time for some lovely breakfast and as it wasn't too busy my boy had a tattoo painted onto his arm which he was very proud of. It was such a beautiful sunny morning we sat outside to enjoy some juice, fresh fruit and he even had a sneaky doughnut. There is a special Rio dozen from Krisy Kreme at the moment and they are colourful and (from what I can tell) very delicious !!


Before the movie we had a chance to meet the Barbatuques who are a musical troupe that perform using their bodies to make music. The musical percussion making Brazillian rhythms is incredible and they even did a little audience participation that the children (and adults) enjoyed. Just before the movie started they also performed Beautiful Creatures the song that is featured in the movie. My boy was too shy to meet them, but they were very friendly and did a mini performance for him which he secretly really enjoyed - he has been playing 'body percussion' ever since :)

The movie itself features Jewel and Blu returning to the Amazon with their young family and is beautifully animated with great music and some endearing characters. We met Nico and Pedro and my boy had Pedro drawn on his arm.


He has watched the DVD a few times since Monday and I'm sure it will become one of his favourites. To give you some idea of how much fun it all was and to witness the amazing Barbatuques performing you can watch this short video all about the launch event.

Disclosure: We were kindly invited to attend the DVD Blu-Ray release of Rio 2 courtesy of Mumsnet in order to write an honest review.