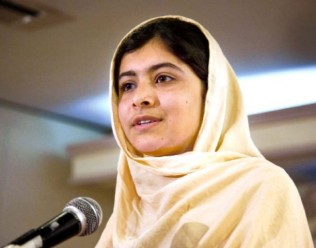 You may have seen an item on the news yesterday about Malala Day. Or you might have heard or seen the address given by Malala Yousafzai to the United Nations. In case you haven't heard of her Malala is a young Pakistani woman who was shot in the head by the Taliban. These grown men targeted a child for trying to get an education and for challenging the assertion that women and girls should not be treated equally in Pakistani society. Yesterday Malala addressed a worldwide audience to denounce the Taliban as fearful of her and of women in general.

It's also possible you have been aware of recent sermons given in some mosques to encourage more positive attitudes towards women. This was partly in response to the press coverage of the arrests of a group of asian men who undertook a campaign of child abuse and sexual assaults on young women. As  others have pointed out preaching that women should not be treated this way will not undo generations of  belief that women are not equal to men. It will not convince those who hold these views to change them. It does, however, give the impression that some imams are taking it seriously and that they believe they hold influence in a community where there are pockets of insanity.

What it has made me more aware of is that I am thoroughly sick and tired of misogyny being part of every day life. Of the casual sexism that we put up with and dismiss as part of the cultural norm. It can't be only me who is mightily fed up of men who are a bit too macho or trying to hard to impress other 'blokey blokes.' I realised years ago that having to subjugate myself in order to make men look better was not something I was happy to do. I was not willing to accept that it's only men who can hold an audience in the pub with funny stories. I dated a man whose friends would all fall about at their mate Martin's jokes and when I responded to yet another sexist anecdote dryly with, "have you ever wondered why you're single Martin ?" they all gave my boyfriend a look that suggested he keep his woman in line in future.

The issue isn't just my low tolerance for macho tomfoolery, but how some women are complicit in this celebration of how much better men are at being funny or clever. I always wondered why I wasn't amused by the 'funniest guy in the office.' One evening out with my impro friends we were joined by an aspiring stand up comedian who was 'on' from the minute he arrived at the table. The lads in our group hero worshipped him and one of the women was obsessed with him so they all laughed at his every word. I was underwhelmed by him and his acolytes and thought I probably just didn't get the joke.

Don't get me wrong, I love to flirt and be feminine. I can be coy and playful and laugh at a man's jokes even when they're not that funny. What I don't do is find it amusing when a man puts women down in order to get the laugh. When a man humiliates his girlfriend or wife in front of people to amuse and elevate his own status. You see this is the subtle manifestation of what the Taliban represent and the cultural attitude that women are 'less than' men. If I laugh when a man puts his wife down or join in when he tells me his girlfriend is a bit dumb I'm complicit in building his belief that it's ok to say it.

Which brings me back to Malala and her amazing courage in facing down the Taliban. It isn't ok that women and girls are beaten, raped, killed and lied about in order to further this idea that they're inferior to men. I am proud that an asian woman has become a symbol of courage and bravery and I hope that she does get nominated for and eventually wins the Nobel Peace Prize.

If Malala's experience teaches us anything it should be to show why being a feminist is about more than arguing amongst ourselves as women. Instead we should be getting on with the business of lifting each other up. Malala was almost killed for challenging a patriarchial society. Her feminism was born of adversity. We don't have to do anything nearly so life threatening.

Bottom line: It's not shameful to be feminist. Women and girls should not feel embarrassed or wrong for wanting to claim the title as their own. My challenge is to ensure my boy grows up with feminist values and respect for women too. 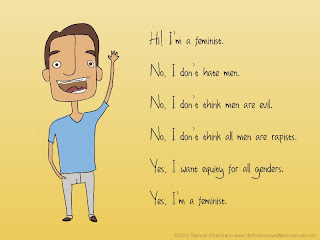