A room of one's own

When we bought our first house together me and Hubbie were keen to have a garden. We were both living in flats in South West London and wanted some outdoor space. He had a small courtyard garden in his bachelor pad in Wandsworth and we would have brunch sitting outside and the neighbourhood cats would pop over to visit. On one memorable occasion when he had the front and back doors open one of the feline neighbours ran through the flat to make a hasty escape from someone or something, not even so much as an 'excuse me' if you don't mind ! My flat wasn't so much of a cat thoroughfare seeing as it was on the sixth floor overlooking Battesea Power Station and with about 12 train tracks running past the window. It was a spectacular view of the River Thames and the New Year's Eve fireworks alone were worth the mortgage !! 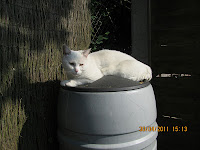 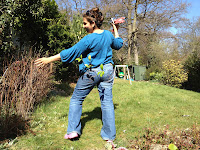 Anyway, when we were looking for a home we wanted a garden because we knew we wanted to rehome a cat and we love spending time outdoors. In our first home together we had a lavender filled idyll where we spent most evenings and weekends in the summer months. I always called it our 'favourite room' and it really was - even with the East Grinstead line going past. Yes train lines are a theme with us. Then as our family grew with our boy joining the fold we decided to move somewhere bigger and even toyed with the idea of leaving the area so that we'd be nearer our respective parents.  After some to-ing and fro-ing and not a little bit of stress we finally found this house and when we read the details Hubbie said, "this must be a misprint, it says the garden is 200 ft long." We came to have a look around with our tiny little baby boy and saw this enormous garden and I just knew we had to live here. Yes it's a lot of work, but more than anything it has given us a whole new massive room to play with.

At first we didn't know much about what was in the garden as we moved here in Oct so the apple trees were full and the leaves were starting to shed, but it took our first year here to appreciate the full beauty of how many flowers and plants we have. Only today I realised that the white flowers growing on the plants I gleefully hacked back last week are Lily of the Valley (and only then because I saw our beloved bees on them and took a big whiff of the scent and it had a distinct hint of Yardley about it !). There are roses all over and after an apple free year last year we have trees groaning with fruit this Summer - bring on the crumbles and pies !! I also have a plethora of beautiful flowers that I can pop into a simple glass vase to bring some of the garden indoors - it adds to my love of 'indoor-outdoor' decor.

This year we've been able to construct more of a play garden space for our son to enjoy. We eat outdoors every chance we get (and Hubbie needs little excuse to fire up his prized gas barbecue when it's as hot as it is at the moment) and he sees it as we do as an extension of the house. Whether he's playing football or chucking water around it's all about having some fun and being outside. We do, however, draw the line at having a trampoline in our garden. I'm not going to get all Kate Hopkins and judgey about it, we just don't want to have one in our favourite room.

Having said that Hubbie has been busy this afternoon building our boy his own 'quiet space' outside. A room of his own where he can contemplate deep thoughts and park his favourite cars underneath when he's finished playing. He's already got some furniture in there and I expect at bedtime tonight he will run in there and hide as he knows Daddy can't fit in there to get him out.

I'm out this evening at a ball - which I need to go and get ready for, like ten minutes ago.

I expect to get home and find them both asleep in the 'new house.'