A breakdown in the time / space continuum 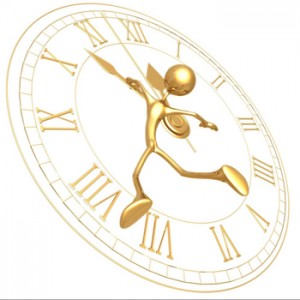 I know that things are going wrong. I know this because in the last few days I've lost track of time and been late to get my son to a toddler birthday party which we knew about for months. In case you don't understand why this is important I should give you some background.

I grew up in a family that was always late for everything. My Dad seemed to think he was able to travel at light speed because if we had to be somewhere at 12 o'clock he'd leave at 5 to 12 regardless of how far it was from our house. In an indian family it's considered odd to be on time for anything so it was fine if we were visiting other indian people, but if it was anyone else we'd feel quite embarrassed as we'd get everywhere really late. As a result of this family history I was notoriously late all the time as I had no concept of being on time for anything. I would leave it too late to get somewhere then the sole would fall off my shoe so I'd have to go home and I'd be even later - yes this really did happen.

When I met my first husband I found out how annoying the tardiness really was. He would arrange to visit his mother and tell her we'd be there at 1pm (and not tell me he'd said that to her) then we'd leave our home at 1pm and he wouldn't even call her to say we'd be late. I'd have to call her and apologise for some made up delay that had occured and she'd be furious with us and rude to me on the phone. I resolved to try harder to keep better time and since then have been a stickler for timekeeping.

Hubbie comes from a family where his Dad would be sitting in the car on the drive waiting for everyone else to make sure they were always early for everything. When we invite our families over we tell the in-laws to come over at 1pm knowing they will arrive early and tell mine it's at 12 because they're always late. Except that one time when my family actually were on time and I was still in my dressing gown as I wasn't expecting them.

Anyway all of this is a long way round saying that I'm such a slave to good timekeeping that if I am late it throws me completely and I cannot cope. If it happens more than once I actually start to lose the plot. If it's someone else who has made me late I am apoplectic.

A few weeks ago I had an important meeting at the BBC which my boss had said he might go to. We got an email to say the time of the meeting had been changed and I was ready to leave with plenty of time to arrive there. Then the boss said he was going to join me. And he wanted to walk there. I asked if he knew the way on foot and he assured me he did. With 5 minutes to the start of the meeting we were still at least 20 minutes away and I suggested that we might have to get on the tube instead of continuing to walk. It turns out that the boss was too cheap to pay for a tube ticket which is why he'd suggested walking so we arrived late, flustered, overheated and sweaty. I was also furious.

Then today we were all invited to Brighton for a 'works outing' and were supposed to meet at the station at 11.30. I changed my morning plans to make sure I'd arrive on time only for all my colleagues to turn up after 12. I wandered round the shops on a gorgeous sunny day until they arrived and then we all had a long walk along the beach and then on to the boss's house for lunch. We eventually got there in time for me to  pop to the loo and turn back to walk to the station to come home as I had to pick up my boy from nursery. It was all a bit of a waste of time really.

I've become very aware of how important all the minutes of my day are since I became a Mum. I have always packed a lot into my time so making space for my son's schedule means it's a tightly run ship. When I have pirates board that ship and make me walk the plank I am not amused at all. I'm taking back the wheel and chucking these time-bandits off my ship from now on.

I'm not a timelord and I can't actually move myself around in a TARDIS so until I can bend time to suit all the places I need to be I just need to breathe deeply and smile at them. Does anyone know where I can get a sonic screwdriver ? 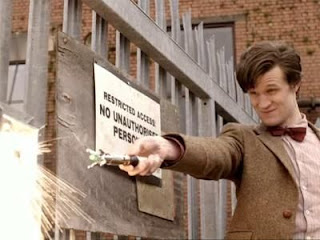