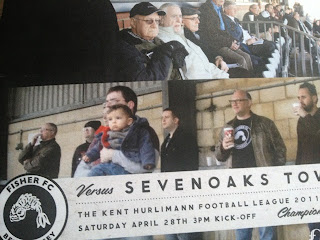 It's a rite of passage for a boy to watch football with his father. We know this because it's the basis of Nick Hornby's Fever Pitch and Russell Brand's autobiography refers to his love of West Ham coming from the time he spent with his father Ronald going to watch matches at Upton Park. My son started going to football with Hubbie when he was a few weeks old. In fact I had to go with them the first time as I was still breastfeeding and had to be there to provide a half time snack for the boy.

I owe a great deal to sport as when my boy was first born Hubbie used to stay up late to watch the San Francisco Giants play and he would take the baby downstairs with him when he woke up at night for a feed. It meant I could do a sleep feed and go back to bed while they boys watched their team eventually go on to win the World Series. Hubbie is convinced that our boy broke the Giants' 30 year losing streak although I draw the line at keeping him awake to repeat the feat again this year.

They don't just watch sport together, they also go to a football activity for toddlers on a Saturday morning and this week I took the little man to an Easter camp where he played football, tennis and basketball. I've mentioned before that he has bundles of energy to burn off and it's lucky that Hubbie loves to do these activities with him as I have zero interest in any sport at all.

Since the early days we have fine tuned the Saturday morning routine and have narrowed it down to the trinity of essentials to keep our boy happy for the afternoon: Snack bag, snowsuit / suncream (delete as seasonally appropriate) and spare clothing. This way he has a snack at half time and is prepared for any weather conditions which considering when the football season falls is pretty important. 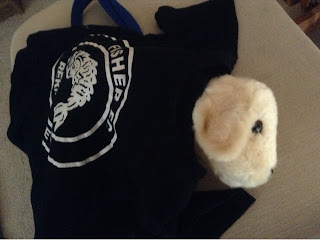 Aside from the bonding between father and son this regular activity has given my boy an impressive repertoire of football chants which thankfully are still repeatable in front of his grandparents. He has a friend who he plays with during the match and has been known to snaffle a biscuit from the board room during half time. In later years I expect he'll sample the delights of the snack bar and come home holding his belly and groaning. Today he took a new friend to football, a dog that he has named Woof Woof, and impressed his pal Freya who has been going to matches since she was a week old.

It was a conversation with Freya's mum that first made me realise how beneficial this whole Saturday football could be for me. I asked what she did while her husband and daughter went out and she said, "I have a bath, read the paper, go shopping. Anything I like really." The lightbulb lit up over my head and I realised that the faff of getting the boys organised was more than worth it for the sake of having an afternoon all to myself.

My usual Saturday afternoon is spent catching up with friends or having some pampering without having to rush home to feed anyone. Today I was massively productive and managed to go for a run, clean the bathroom and fridge, have a pedicure and baked some cookies. I also indulged in some kitchen porn and added a dishwasher, washing machine, cooker and fridge to my John Lewis online wish list. It's a far off dream, but when there are no distractions from the boys miaowing for biscuits, whining for milky way stars or asking me what's for dinner I am free to meander online and plan my ideal kitchen.

The season was due to finish in about a month, but the weather has been so bad that there are a few postponed games to be played. I have to make the most of my beloved and precious Saturdays until then or hope that something else takes the place of football once the season does finally end.

I have my fingers crossed for baseball and good weather :o)