I never drank the milk anyway, but that's not the point.

A couple of things discombobulated me today. Firstly it appears that the misguided clothing style from my teens has been appropriated into a 'revival' so I saw almost my entire wardrobe from when I was 18 in the shops this afternoon. It was disturbing to say the least seeing bold prints, bad trousers and (heaven forfend) bodies on sale again. As a wise woman once said, "if you're old enough to remember it from the first time it was in fashion you're far too old to wear it this time."

Secondly I was just about to go on air this afternoon and present my radio show, which today I'd subtitled "Spring Fling' in homage to a ball that they used to hold at my university. [For younger readers a ball was what you now call a prom] As I waited for my fellow presenter to wrap up her show I looked at twitter and saw this: 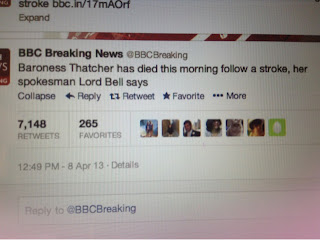 So my plans for a cheery and light hearted show with some fun tunes was suddenly threatened as I saw the steady stream of vitriolic and abusive messages with links to anti-Thatcher songs on social media. It was tempting to go with a show about the news, but it would also be out of step with my usual style so instead I just didn't mention it on air at all.

Instead I played music from my years at Uni as that era was fresh in my mind and they just happened to be songs that typify the Thatcher years as PM. In fact she once visited the campus as the University of Warwick was her favourite example of enterprise in further education. She arrived in a helicopter and a student - who is now communications manager for a local authority in East London that rhymes with Hower Tamlets - threw eggs at her. He wasn't doing a degree in PE so of course he missed.

In the interests of full disclosure I hated Thatcher with a passion. So much so that I was actually angry at Meryl Streep for portraying her sympathetically in The Iron Lady. In my dating days I went out with a man who had her photograph in his upstairs bathroom and I was so horrified that he would do that (even for a joke) that in my head I already knew it was over. 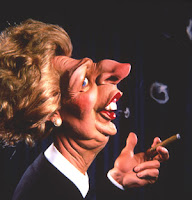 I grew up in a house where if she was on the TV my Dad would swear and change the channel. It was ingrained in us as children to hate her and to this day the sound of her voice makes me shudder. In my youth it was all the rage to call her a milk snatcher and Spitting Image portrayed her as an increasingly masculine character over the years ending with her smoking stogies and wearing a pinstripe suit.

Now considering that on twitter I mostly follow people who hold similar views to me it's unlikely that I'd have seen any heart felt tributes to her, but I do have friends whose politics are very different from mine. It makes certain conversations difficult, but I have always been honest about how I feel about Thatch and the myth that she was a powerful force for women and feminism.

I'm not celebrating or finding joy in her death. Not because of any mawkish sentimentality about her being an old woman you understand. She died peacefully in old age, in the comfort of the Ritz hotel and not in poverty or disablement. How very similar to her good friend Pinochet.

So today while others are going apoplectic with rage at her past deeds and others are calling for a rational and measured response to her being accorded a ceremonial (not State) funeral I am celebrating something different. 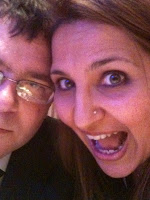 On Friday I went to a job interview after being a stay at home parent for most of my son's life so far. I wasn't sure if my suit would fit (it did) or if I would know what to say (I did) or if they would even offer it to me (they did). Now the hard part. I've asked them to consider part time hours so that I can still care for my son a few days a week. The salary does not cover full time childcare and I'm sure they could use the cost saving of part time hours as they are a charity. I find out their decision tomorrow, but if they don't go for my suggestion it's nice to know I can still get a job in these austere times.

So today is not about her, it's all about me.

Just the way it should be :o)

Email ThisBlogThis!Share to TwitterShare to FacebookShare to Pinterest
Labels: family, feminism, in my humble opinion, little bit of politics, my boy, news, work