I mentioned on social media the other day that after ten years of marriage I had run out of original ideas for anniversary gifts. Quite frankly Hubbie has all the mugs with images of the kids on that he's ever going to not use and if I keep getting him pants and socks we may as well just rename ourselves Stan and Hilda - ask your mum, no go on I'll wait. This year I gave him the gift of a new TV show to fall in love with. In the past I have tried - and failed - to get him into The Wire (too much investment) Breaking Bad (just not really into it) the West Wing (too much time has passed) and Empire (storylines so ridiculous that even I'm struggling now). My past successes include; Curb Your Enthusiasm - a joint favourite that still raises chuckles, Bake Off - which he pretended not to watch until it became blindingly obvious he is such a superfan, Modern Family - well if you don't watch it then we just can't be friends can we ?

The new favourite is ... drum roll please.... The Goldbergs. It was while we were on our child-free mini-break that I stumbled across it and said, "watch this, you'll enjoy it." Only I had no idea why I love it so much until I had watched quite a few episodes. Beverly Goldberg is my parenting idol. I've started to take pride in my stereotypical 'Indian mum' approach to parenting. I shout at my kids, I tell them they are embarassing me, I stand nose to nose with them and hiss at them to "stop it or else," I even ask them repeatedly if they are hungry. I had it all sorted. Then I saw Bev and I realised that there's a higher level I can only aspire to.

Now I've heard about the whole Jewish mother scenario, dammit, I even know some, so it's not like I am unfamiliar with the concept. It's not until I saw Beverly in action, however, that I realised she is clearly the end goal I am aiming for. I mean it's just so obvious. 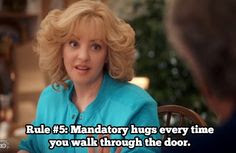 I demand my kids hug me and make it clear that it's their duty to me as their loving mother.

I take great offence if they don't thank me - profusely - for everything I do for them. Witness Bev at Thanksgiving dinner waiting for her - well deserved - thanks and not getting them until Murray does the decent thing. Hubbie does prod the boys into thanking me, but to be honest if I've said, "Thank you Mummy" in a patronising/sarcastic tone once I've said it fifty times. Today.

I have serious 'Mom goggles" - my kids can do no wrong (despite what I said above) I am inordinately proud of the smallest achievements. "You took your own socks off ? Well done baby, Mummy is so proud." In front of other people I'm all humble brags and modesty, but behind closed doors it's medals and trophies for everything in this house.

I am protective like a crazy person - that's pretty much the definition of a mum for me right there. Mess with my kids and I'll mess you up. Seriously.


I don't want anything bad to happen to my kids so I am there. In their faces, whether they want me to be or not. Bev doesn't care if it's embarassing and neither do I.

On Sunday Brown Bear took part in his first Junior Park Run and he was convinced he was going to ace it. I suggested I might run alongside him and he said, "No Mummy, I can do it by myself." "Ok, I'll just run by myself behind you then" I said. A few minutes into the run his pre-run lunacy in the park caught up with him and he was exhausted. He got upset and told me he couldn't do it so I took his hand and ran with him. Then I walked with him. He wanted to give up and stop and I said, "Let's just do a bit more then we can finish if you like." He carried on. Then I suggested he might want to try and run the downhill bits. He ran a bit then he said, "I want to hold your hand Mummy." So we completed the park run part walking, part running. Holding hands. As he approached the finish he let go of my hand and I could see he was as proud as anything for completing it. In the retelling he was as fast as Mo Farah and I wasn't even there. He did it.